Usage of golden and Silver Pots in Islam

Storage vessels in which water and other things are kept.

Usage of Gold and Silver Plates

1- For Eating and Drinking

Their usage is forbidden, as stated by the Prophet ﷺ: “Do not drink from gold and silver containers and do not eat from plates made from them. Verily they are for them (the unbelievers) on earth and for you (the believers) in the hereafter.” [ agreed upon]

And he ﷺ said: “He who drinks from a silver container, indeed (he) causes hell-fire to boil in his belly.” [ agreed upon] 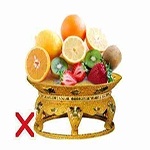 Eating from in a Gold Vessel 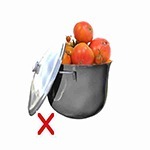 Eating from a Silver Vessel

2- For Other than Eating and Drinking

It is permissible to use gold and silver for things other than eating and drinking, for example to perform ablution. This is based on the specificity of the previously mentioned hadeeth to eating and drinking. Also we see evidence for this from the hadeeth of Ummu Salamah (may Allah be pleased with her). She possessed a small container resembling a bell made from silver that contained grains of hair belonging to the Prophet ﷺ.[ narrated by At-Tirmidhi.]

Usage of Containers Patched with Silver

It is permissible to use containers patched with a small amount of silver. The patching must be for the purpose of repair only and not beautification, as is shown in the hadith in which the Prophetﷺ mended the cracked portion of a pitcher with a chain made of silver.[ narrated by At-Tirmidhi.]

A Silver Vessel for Wudu’ 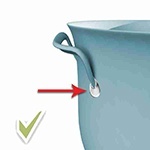 Use of a Vessel Repaired with Silver

Usage of golden and Silver Pots in Islam