1- Covering one’s nakedness from people when using the toilet. The Prophet ﷺ said: “A screen is set up between the eyes of the jinn and the private parts of the children of Adam when they mention Allah’s name (they say bismillah) before using the toilet.” [ narrated by At-Tirmidhi.]

2- Protection of the body and clothing from becoming stained with impurity, but if they become stained, he should wash them off. The Prophet ﷺ walked by two graves and said: “Both of them are being punished, but not for a major sin. This one did not wash urine from himself......” [ narrated by Abu Dawud]

Cleaning oneself by using water and stones; or the likes. On the authority of Anas Ibn Malik t who said: “Whenever the Prophet ﷺ went to the privy to answer the call of nature, a servant and I used to carry a skin water container and a spear, and he would cleanse himself with the water.” [ agreed upon.]

1- Facing the Qiblah (direction of prayer, which is towards the Ka’bah) or turning one’s back to the Qiblah when relieving oneself in an open area e.g. the desert.

When in buildings, it’s best not to face or turn your back to the Qiblah. The Prophet ﷺ said: “When you relieve yourselves do not face the Qiblah and do not turn your backs to it while urinating or defecating, but turn west or east of it (e.g. turn in another direction if you are facing the Qiblah or your back is towards it).” [ agreed upon.]

2- To urinate or defecate in the paths and thoroughfares of people, their shade, or meeting places. The Prophet ﷺ said: “Beware of two who are cursed,” they (the Companions) y asked : “O Messenger of Allah, who are they?” He ﷺ said: “Those who relieve themselves in the path of people or where they take shelter and rest.” [ narrated by Muslim.]

3- Urinating in still/non-flowing water, like a pond, lake or place of bathing: e.g bath pond, hot spring. The Prophet ﷺ said: “Don’t anyone of you urinate in still water and then bath in it.” [ agreed upon.]

4- Entering the lavatory with the Qur’an. 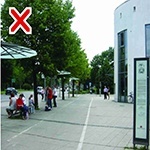 Recommended Acts when Relieving Oneself

1- Staying out of people’s sight while defecating or urinating outside.

2- To say while entering the lavatory: “Bismillah, O Allah, I seek protection in You from wicked male jinn and female jinn.”[ agreed upon.]

4- To seek Allah’s forgiveness upon exiting the lavatory by saying “Your forgiveness.” [ Narrated by Abu Dawud.] 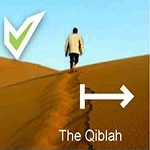 Relieving Oneself in the Desert or Wilderness 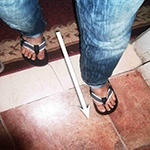 Entering with the Left Foot 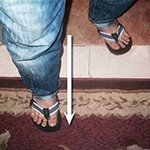 Leaving with the Right Foot

It has been proven that urinating in stagnant water produces fluke worms/parasites (schistosoma) that cause bilharzia (schistosomiasis); commonly called snail fever. [ Prophetic Medicine in Light of Modern Science, Ghiyath Ahmad.]

Things Disliked When Relieving Oneself

1- Saying something while defecating or talking with someone else, except when the need arises. Ibn Umar  reported “that a man passed by the Prophet ﷺ while He (the Prophet) was urinating, and he said salams unto him, but the Prophet didn’t reply. ”[ narrated by Muslim.]

2- Entering the toilet with something bearing the inscription of Allah’s name, unless there is fear of it being stolen. If you enter the lavatory with a Mushaf/Qur’an or a book containing verses from the Qur’an and/or hadeeth’s of the Prophet, you must place them in a place away from the toilet itself e.g. on a window sill, ledge, in a coat pocket and then hang the coat from a hook, etc. It’s not permissable to hold them or have them on your person while you relieve yourself.

3- Touching the private parts with the right hand or cleaning oneself (either Al-Istin ja’a or Al-Istijmar) with it. The Prophet ﷺ said: “None of you should touch his penis with the right hand while urinating, neither should he clean himself (from defecation or urine) with his right hand after defecating.” [ agreed upon.]

4- Urinating into cracks and holes of rocky ground. This is to avoid harming the creatures living in them, or so that they will not harm you. 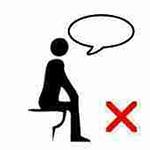 Speaking While Relieving Oneself

Entering the Bathroom with something which has Allah’s Name on it. 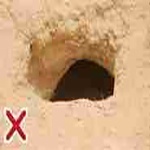 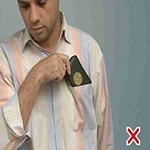 Entering the Bathroom with a Mushaf

Removal of traces of urine or feces with clean water.

Removal of traces of urine or feces by wiping with stones or something similar.

The use of water for purification after using the toilet has been legislated based on the hadeeth of Anas Ibn Malik t who said: “Whenever the Prophet ﷺ went to the privy to answer the call of nature, a servant and I used to carry a skin water container and a spear, and he would cleanse himself with the water.” [ agreed upon.]

It is permissible to clean oneself with stones, toilet tissues, leaves, etc. by themselves, instead of using water, if two conditions are met:

1- That urine or feces do not go beyond the regions from which they have exited. When they go beyond these regions it is compulsory to use water. (An example of this is if either of them runs down ones leg.)

2- Al-Istijmar should be done with three wipes or more until the passages (front or back) become clean.

1- Cleaning oneself and removal of impurities.

2- Neatnesss and protection from causes of diseases.

- Al-Istinjaa doesn’t have to be performed after merely passing wind.

The Conditions for What Is Used for Al-Istijmaar

1- It must be clean; Najasah may not be used for Al-Istinjah.

2- It must be permissible in Islam, it is wrong to use forbidden objects.

3- It must be capable of cleaning the soiled area.

4- It must not be a bone, dung or the likes. Salman Al-Farisi said: “Indeed, the Prophet ﷺ forbade us from facing the Qiblah while defecating or urinating, from wiping (ourselves) using the right hand, wiping with less than three stones, or wiping with dung and bones.” [ narrated by Muslim.]

5- It must not be something that has any respected importance or something sacred in the religion e.g. food or papers containing religious script and/or information.

Examples of things that can be used include clean stone, handkerchief, toilet paper, sanitary paper, and a piece of cloth. 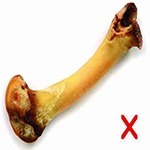 Cleaning oneself with Bone 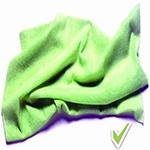 Cleaning oneself with a Piece of Cloth 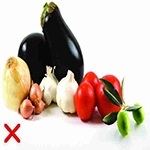 Cleaning oneself with Food 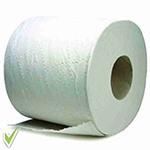 Cleaning oneself with Toilet Paper 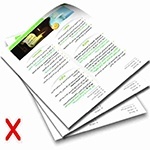 Cleaning oneself with Revered Papers 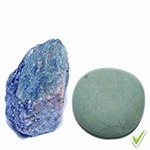 Cleaning oneself with Stone

Making Istinjaa with Ones Right Hand

Cleaning oneself after answering the call of nature with your right hand is forbidden. The Prophet ﷺ said “None of you should touch his penis with his right hand while urinating, neither should he clean himself (from defecation or urine) with his right hand.” [ narrated by Muslim.]

Download : The Rulings of Relieving Oneself - Purification - Book Illustrated Islamic Law for Acts of Worship


Tags: cleaning oneself taharah in islam

How to perform Wudu (ablution)?