Definition of Khuff and Normal Socks

What is worn on the foot and made from leather.

What is worn on the feet but made from cotton etc..

The Ruling of Wiping over the Khuffs and Normal Socks

It is permissible to wipe leather footwear and socks, as is narrated by numerous traditions. When Anas Ibn Malik t was asked concerning wiping over leather footwear, he said: “The Prophet ﷺ used to wipe over them.” [ agreed upon.]

Conditions for Wiping Over Leather Footwear and Socks

1- Both should be put on after being in a state of purity. Al-Mughirah t said: “I was with the Prophet ﷺ on a journey, then I intended to remove his khuffs (during wudu’) and he ﷺ said: ‘Leave them both because I put them on in a state of purity,’ (i.e. after performing wudu’) then he wiped over them.” [ agreed upon.]

2- They must cover both the feet and the ankles. What’s above the ankles isn’t wiped because it’s not part of the feet.

3- They should be made from pure materials.

4- Both should be made from permissible material and not from forbidden ones, such as silk for men.

5- The wiping should be done within the prescribed time limit for wiping. This is because the Prophet prescribed a specific wiping period (a day and its night for a non- traveller, and three days and nights for a traveller) which must not be exceeded.

6- Wiping over socks or footwear is only allowed for purifying from al-hadath al-asgar (lesser impurity) and not al-hadath al-akbar (greater impurity). Safwan Ibn ‘Assaal said: “The Prophet ﷺ used to order us, when we were travelling, to wipe over our khuffs and not take them off for three nights in the event of defecating, urinating or sleeping; except when we had discharge due to a wet dream or sexual intercourse.” [ narrated by Al-Bukhari.]

This means that janabah obligates the removal of any leather footwear in order to bathe, after which one can wear them again.

The Manner of Wiping over Footwear and Socks

The upper part of the socks and/or footwear is wiped over with wet hands, from the toes to the base of the shins in one wipe – the left and the right foot at the same time. The right hand wipes the right foot and the left hand wipes the left foot. The bottom of the feet and ankles are not wiped. Ali  said, “If the religion was based on reasoning, then the bottom of the foot would be more worthy to be wiped over than the top. However, I saw the Prophet ﷺ wipe over the upper part of his kuffs.” [ narrated by Abu Dawud.] 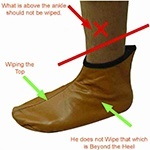 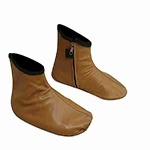 Calculating the Time Limit for Wiping

The period starts from the first wipe after one’s wudu’ is invalidated. When a person puts on socks while being in a state of purity, and thereafter he becomes impure (by defecating for example), then he may wipe over the socks when performing wudu’. This would be considered the first time he wiped after putting on the socks. From this time the period of a day and a night (24 hours) starts to be counted. For example, A man performs wudu’ by washing his feet, and thereafter puts on his socks and prays fajr. His wudu’ was invalidated around 10am, and then he performed wudu’ around 11am to observe the mid-day optional prayer (Salatudh-duha), wiping his socks in the process. From this time onward, he is permitted to keep on wiping over his socks until 11am of the following day. This is for the non-traveller. As for the traveller, however, it (the wiping period) is three days and three nights.

1- Termination of the prescribed period of wiping.

2- Removal of one or both of the socks.

3- Occurrence of greater impurity. Safwa’n Ibn ‘Assaal t said: “The Prophet ﷺ used to order us, when we were traveling, not to remove our leather footwear (khuff) for three days and nights, except for Janabah (sexual discharge). That is do not remove them for defecating, urinating, and sleep.” [ narrated by At-Tirmidhi.] 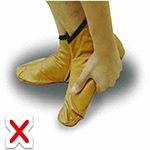 Wiping the Bottom of the Khuff 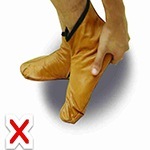 Wiping Over The Heels 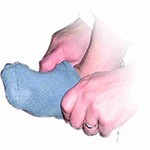 Removal of the Socks Nullifies the Wiping 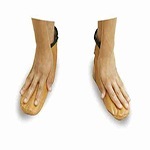 Wiping with Both of His Hands

A man made Wudu’, washed his feet, and then put on his socks. He then prayed fajr prayer. At 10 am he broke his wudu’. He made wudu’ at 11 am in order to pray the Zhuhr prayer and wiped over his socks. In such a case it is permissible for him to continue wearing and wiping over his socks until 11 am the following day. This is for the non-traveller. As for the traveller, he may wipe over his socks for three days and nights. 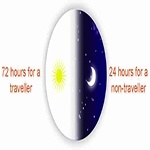 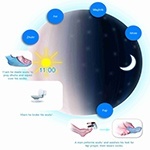 Definition of: Bandages, Splints and Band-Aids.

They are used in holding broken limbs in place, and are made from gypsum and guaze, or similar materials.

They are also used in holding broken limbs in place, but are made from pieces of wood or similar material and are bound around the broken limb.

They are used to cover wounds, burns etc. They are made from fabric or the like, and are used for medical purposes.

They are used to cover burns, cuts and wounds for medical reasons and are generally adhesive. 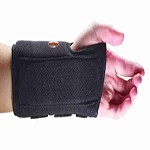 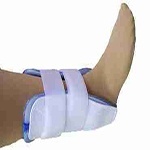 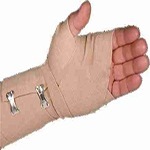 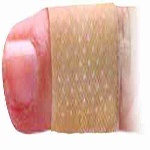 Evidence for the permissibility of wiping over splints etc

On the authority of Jabir t who said: “We went on an expedition during which one of us was wounded on his head by a stone. Afterwards, this person had a wet dream and asked his companions: “Do you find any concession (rukhsah) for me to perform At-Tayammum (instead of taking a complete bath; since I have a head injury)?” They replied: “You are not permitted to perform At-Tayammum, because you are capable of using water.” He then took a bath and died. When we met the Prophet ﷺ, the matter was reported to him and he said: “They killed him, may Allah kill them! Why did they not ask when they were ignorant, for the cure of ignorance is asking questions. It was enough for him to perform at-tayammum or bind a bandage over the wound (the narrator Musa was doubtful); then he should have wiped over this and bathed the rest of his body.” [ narrated by Abu Dawud.]

Conditions for Wiping over Casts, Splints, Bandages or Band-Aids

1- The cast, splint or bandage must not transcend the place that needs care and the necessary portions surrounding it.

2- It is not a condition that one should be in a state of purity before putting them on, neither is there a prescribed time limit for wiping over them. As long as there is a need for them to be worn, it is permissible to wipe over them even when removing the greater state of ritual impurity. But when the need for their use ceases, they must be removed and henceforth the parts underneath must be washed during wudu’ and bathing.

3- As for band-aids and bandages etc., which can be removed easily, the following should be observed:

a- If they are easy to remove and washing the part underneath will not cause any harm or delay healing, it should be removed and the portion underneath be washed, after which they may be replaced.

b- If they are not easy to remove and washing the injury may prolong the healing process, then they should be wiped over during wudu’ and bathing.

How to Wipe Over Casts, Splints and Bandages 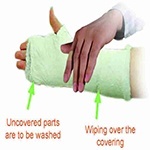 How to Wipe a Cast 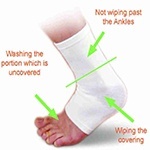 How to Wipe over a Bandage 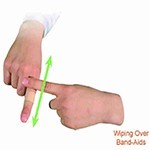 Manner of Wiping Over Adhesive Bandages