Definition of the Recommended acts of Al-Fitrah

They are acts that produce the natural disposition that Allah created mankind upon. With them, a human being becomes complete and exists in the best form and appearance.

A’ishah (may Allah be pleased with her) reported that the Prophet ﷺ said: “Ten things are part of Al-Fitrah: trimming the moustache, letting the beard grow, using As-Siwak, snuffing up water into the nose (in ablution), clipping the finger and toe nails, washing the knuckles, plucking the armpit hair, removing the pubic hair, cleaning the private parts with water after using the toilet, rinsing out the mouth with water.” [ narrated by Muslim.]

It is a piece of stick from the Arak tree used to brush the teeth and rid them of food, particles, and odor.

The use of Siwak is encouraged at any time of the day. The Prophet ﷺ said: “As-Siwak is purification for the mouth and pleasing (to) the Lord (Allah The Most High)” [ narrated by Ahmad.].

Its use is especially recommended for the following:

The Prophet said: “Were it not that I might overburden my followers, I would have ordered them to use the Siwak every time they make wudu’.” [ narrated by Ahmad.]

The Prophet ﷺ said: “Were it not that I might overburden my followers, I would have ordered them to use the Siwak at (the time of) every Salah.” [ agreed upon.]

3- When Entering the House

Narrated Al-Miqdam from his father t that he said: “I asked A’ishah (may Allah be pleased with her) , ‘What does the Prophet ﷺ do first when he enters his house?’ She replied: ‘He uses As-Siwak.’” [ narrated by Muslim.]

4- After Waking up from Sleep

Hudhaifah  said: “When the Prophet wakes up in the night, he cleans his mouth with Siwak.” [ narrated by Al-Bukhari.]

5- Before Reading the Qur’an

Ali  narrated, when he ordered people to use the Siwak, that the Prophet ﷺ said: “Indeed, when a servant (of Allah) (exalted be He) uses the Siwak, then stands for prayer, an angel stands behind him to listen to his recitation. He (the angel) moves closer to him until he places his (the angel’s) mouth on his (the reciter’s) mouth, and there is nothing that comes out of his mouth of what he recites except that it is in the stomach of the Angel. So clean your mouth before reading the Qur’an.” [ narrated by Al-Bazzar.] 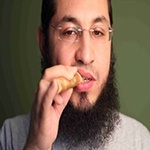 Benefits of Using the Siwak

From the benefits of the Siwak is that it’s purification for the mouth in this world, pleasing to our Lord – Allah the Mighty and Majestic - in the hereafter, it strengthens the teeth, thickens the gums, clears the voice and invigorates its user.

2- Rinsing the Mouth and Nose Out with Water

Rinsing the Mouth Out with Water

This is done by putting water into the mouth and swishing it around.

Rinsing the Nose Out with Water

This is done by gently inhaling water into the nose and then blowing it out. 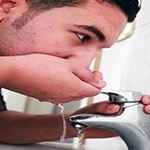 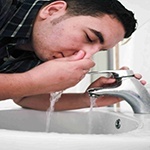 Al-Istinjah is the removal of the traces of urine and/or feces by washing the private parts with water after relieving oneself.

4- Trimming of the Moustache

What is intended by the trimming of the moustache is grooming it properly and looking different from the disbelievers.

It is leaving the beard as it is and not removing any of it or shaving it.

Shaving the beard is forbidden because the Prophet ﷺordered the men to grow it. The Prophet ﷺ said: “Trim the moustaches, leave the beards, and be different from the magians.” [ Narrated by Muslim.]

The Benefit of Removing the Pubic Hair

It has been proven scientifically that shaving pubic hair maintains the health and well-being of the skin; and that the presence of hair on this part of the body frequently causes skin rashes and irritations.

This is the removal of the foreskin from the head of the penis.

It is the reduction of the extra skin above the clitoris.

Circumcision is for males while trimming is for females. This is according to the hadith where the Prophet ﷺ ordered Umm ‘Atiyyah thus: “Be light in your cutting and do not remove any flesh (i.e. just trim the foreskin that’s over the clitoris), for it gives (some) smiles to her face and brightens it, and is more pleasing for her husband.” [ narrated by Al-Hakim]

Circumcision is obligatory for the males and recommended for females. The reason for this is that circumcision promotes good hygiene for males and trimming helps in the general wellbeing of females.

8- Clipping the Finger and Toe Nails

It is cutting, trimming and/or filing the nails to avoid them growing long. 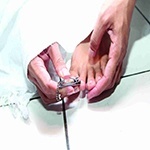 9- Plucking/Shaving the Hair under the Arm

It is the removal of the hair growing in the armpit. By so doing, neatness is achieved and bad odor associated with hair growig there is avoided. 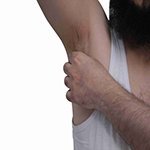 Plucking/Shaving the Hair from the Armpits

These are the joints of the fingers as seen from the back of the hand.

Some scholars have added to the above the dirt that collects around the ears and neck, and some other parts of the body. 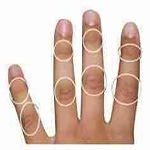 
Tags: The Practices of al Fitrah fitrah in islam

Wiping over socks, casts, and bandages for wudu (ablution)
Purification