An-Najasah in The Context of Islamic Law

Impurities which the Islamic law orders to be removed

The proof is the hadeeth about the bedouin Arab who urinated in the mosque and the Prophet ﷺ admonished him by saying, “These masaajid (mosques) are not for urinating or other filth, but they are for the remembrance of Allah, Salah and recitation of the Quran.” [ agreed upon.]

The proof for this is from the authentic narration, when Khaulah, the daughter of Yasaar y, went to the Prophet ﷺ and said: “O Messenger of Allah, I possess only one garment and I am menstruating,” the Prophet said: “When the blood stops (and you have taken a bath), wash the part stained with blood then pray in it.” [ narrated by Abu Dawud.]

Any blood, apart from menstrual blood, is pure. Whether it is blood spilled out or other than that. The evidence for this is the narration where one of the polytheists shot an arrow at one of the believers when he was praying. The man was hit and blood began flowing from the wound, but he removed the arrow and continued his prayer.

This is established on the hadeeth of Ibn Mas’ud : “The Prophet ﷺ went to the toilet and he ordered that I bring him three stones, but I only found two stones. I searched for a third, but didn’t find it, so I took a piece of dung and went to him with them. He took the two stones and dropped the dung saying: ‘This is impure.’” [ narrated by Al-Bukhari.]

What is the ruling on urine and feces of animals that are permissible to eat?

The urine and dung of animals that are permissible to eat are pure, as is confirmed in the hadeeth from Anas ibn Malik t He said that: “Some people came to Al-Madinah and became ill while therein. The Prophet ﷺ sent them to a herd of camels, (which had been) given as charity, (for them) to drink from the camels’ urine and milk.” [ narrated by Al-Bukhari.]

It is any animal which died on its own, without being slaughtered in accordance with Islamic Law. Allah I the Most High says: “Say (O Muhammad ﷺ I find not in that which has been revealed to me anything forbidden to be eaten for one who wishes to eat it, except it be a dead animal, or blood (that has) spilled out, or the flesh of pigs; for that surely is impure...” (Al-An’aam:145).

Dead meat also includes any part cut from a live animal, before the animal is slaughtered.

From the statement of the noble Prophet:ﷺ “There has been made permissible for us two carrions and two types of blood. As for the two carrions, they are fishes and locusts (they can be eaten un-slaughtered) and as for the two bloods, they are the liver and spleen.” [ narrated by Ahmad.]

2- Dead Animals Which Have No Flowing Blood (like flies)

The Prophet ﷺ said: “When a fly falls into any one of your containers, you should dip it in (the liquid) completely, and then remove it, because verily, in one of its wings is an antidote and the other a poison.” [ narrated by Al-Bukhari.] 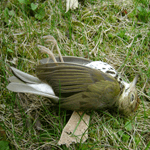 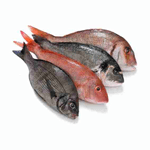 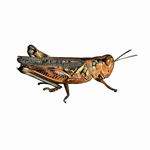 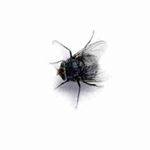 Allah I says: “Say (O Muhammad ﷺ: I find not in that which has been revealed to me anything forbidden to be eaten for one who wishes to eat it, except it be a dead animal, or blood (that has) spilled out, or the flesh of pigs; for that surely is impure...” (Al-An’aam:145). 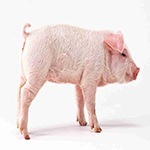 The Prophet ﷺ said: “When one of you wants to purify a container from which a dog has drunk, wash it seven times, the first time with soil.” [ agreed upon.]

It is a whitish sticky liquid that is produced during foreplay or by thinking of sex. It is neither emitted from sexual desire nor does it gush forth, and it is not accompanied by a feeling of tiredness due to its release - contrary to semen. One may not even notice its discharge. This is according to the hadeeth from Ali bin Abi Talib  who asked the Prophet ﷺ concerning this, who then replied: “Wash your private part and perform ablution.” [ agreed upon.]

It is a thick white fluid that comes out sometimes after urination.

Semen is a thick white fluid that exits the body at the peak of sexual stimulation and gushes forth when it exits. Its release is accompanied by a feeling of tiredness and it smells somewhat like the pollen of a palm tree or yeast. It is pure. This is because if it was impure, the Prophet ﷺ would have ordered us to wash anything spoiled by it. In regards to removing al- maniy, it is sufficient to rinse the cloth if al-maniy is wet, or just scrape it off if it is dry. This is according to A’ishah (may Allah be pleased with her) who said: “The Prophet used to wash semen from his clothes and go to pray in them while I saw traces of the rinse water on them.” [ agreed upon.] And in the narration by Muslim: “I remember scraping it (Al-Maniy) from the clothes of Allah’s Messenger, and then he prayed in them.” [ narrated by Muslim.] 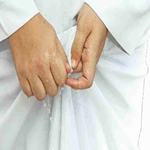 Washing it off when still wet 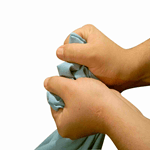 Scraping it off when it has dried

Alcohol is physically pure. Although it is impure on a spiritual level and drinking it is one of the major sins in Islam, there is no evidence stating that it’s physically impure.

As for the statement of Allah (exalted be He): “O you who believe! Intoxicants, gambling, al-ansab (stones used as shrines or idols), and al-azlam (arrows for seeking luck or decision) are an abomination of shaitan’s handiwork, so strictly avoid them in order that you may be successful.” (Al-Maidah: 90).

What is meant by this verse in reference to alcohol is spiritual impurity, and not physical impurity. In this regard it is just like gambling and idols. 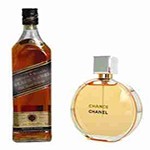 1- Purification of An Impure Floor or Impure Ground

When an impurity falls on a floor, it can be purified by using water or another purifying substance. This is according to the hadeeth of the bedouin Arab who urinated in the masjid, when the Prophet ﷺsaid: “Leave him, but pour a pail or a bucket full of water on his urine.” [ narrated by Muslim.]

However, when the liquid impurity spreads and then dries, the floor then becomes purified. This is evident from the statement of Abu Qilabah t who said: “When a floor becomes dry, it is clean.” [ narrated by Al-Bukhari.] 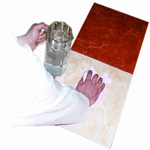 Washing The Ground/Floor with Water 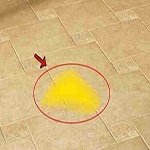 Liquid impurity on the floor 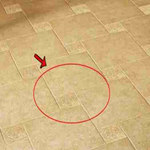 Drying of the liquid impurity

It is purified by adding more water to it until the trace or traces of impurity disappear. And it can be purified, as well, by using modern purification methods. 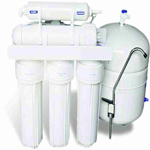 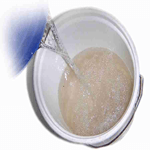 3- Purification of a Garment on which an impurity has fallen

It is washed with water, rubbing and squeezing it until the impurity is removed. 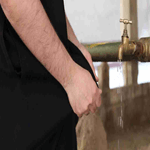 Washing an impurity from a garment.

Sheets, blankets etc. are washed with water, or with water and (then) modern cleansers - if necessary - until the impurity is removed. 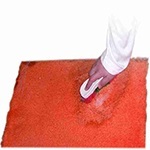 5- Purification of Hides from Dead Animals

1- Hides from Animals That Are Permissible To Eat:

Hides are purified by tanning. The Prophetﷺ said: “When a skin is tanned it has become pure.” [ narrated by Muslim.] Tanning is the treatment of hides with special substances which soften them and remove the stench from them. The hides of animals which are permissible to eat and who were slaughtered according to shari’ah guidelines are pure.

2- Hides from Animals That Are Impermissible To Eat

As for hides which cannot be distinguished one from the other - i.e. whether it is the hide of a permissible or impermissible animal - then tanning does not purify it, even though it (the hide) could be pure in actuality. 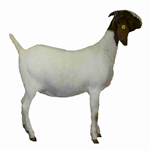 An animal whose meat is permissible. 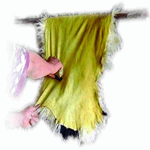 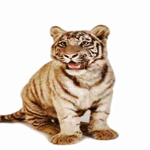 An animal whose meat is not permissible

6- Cleaning of Urine from Babies That Have Not Been Weaned

A baby-girl’s urine is washed from any fibrous material e.g. garment, bed sheet, etc. to purify it, however sprinkling water is sufficient for purifying something from the urine of a baby-boy.

This is according to the hadeeth of A’isha (may Allah be pleased with her) who reported the Prophet ﷺ to have said: “The baby-girl’s urine is washed while that of a baby-boy is sprinkled on.”[ narrated by Abu Dawud.]

Sprinkling upon a baby-boy’s urine.

Washing from a baby-girl’s urine.

7- Purification of a Container in which a Dog Has Licked

It is washed seven times, the first with soil. The Prophet ﷺ said: “The purification of your container in which a dog has licked is by washing it seven times; the first time with soil.” [ agreed upon.] 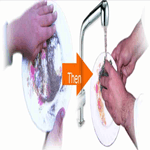 Purifying with soil.)Once( Then Purifying by washing (Six times)

8- Purification from Madhy and Wady

He should wash his penis and perform ablution. The Prophet ﷺ said according to the hadeeth of Ali bin Abi Talibt: “Make wudu’ and wash your private part.” [ agreed upon.]

As for cloth stained with either of these, it is enough to drop water on the portion stained. This is according to the the hadeeth of Sahl ibn Haneef t when he asked the Prophet ﷺ: “How do I clean my garment which is stained with it (Al-Madhy / Al-Wady),” He ﷺ said; “It is enough if you use a handful of water and sprinkle it on your clothes when you find it (Al-Madhy / Al-Wady) has smeared it.”[ narrated by Abu Dawud.]

It is washed with water and there is no problem if traces of it remain. The Prophet ﷺ said: “Water is enough (to clean it) and the traces will not harm you.” [ narrated by Abu Dawud.]

Any type of footwear can be purified from filth by rubbing them in dirt or sand until there are no traces of impurity on them. The Prophet ﷺ said: “When any of you steps in an impurity when you’re wearing shoes, the soil is enough to purify them.” [ narrated by Abu Dawud.] 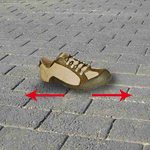 Purification of shoes by rubbing them on the ground.

If the tail of a female’s garment is stained (with an impurity), it is enough for her to continue walking over a clean place; which thereby purifies the garment. The Prophet ﷺ said: “What comes after it (clean soil) will purify it.” [ narrated by Abu Dawud.] 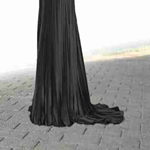 The female’s garment purified by walking across clean ground.

12- Purification of Solid Food from An Impurity

The impurity and the contaminated portion of food surrounding it are removed until what remains is pure and has not been contaminated by the impurity. The Prophet ﷺ said concerning a rat which had fallen into some butter, “Remove it (the rat) and the butter around it, and then eat your butter.” [ narrated by Al-Bukhari.] 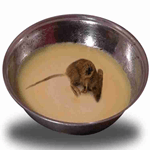 Butter in which a dead rat fell.

13- A Silver Vessel for Wudu’ Like a Mirror and Glass

They are wiped until the traces of impurity are removed. 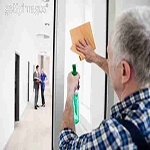 Purification of glass by wiping.

1- The fundemental principle regarding things is that they are pure until something indicates otherwise.

2- When an impurity befalls any cloth etc, but the exact place of the impurity is unknown, the entire cloth is to be washed.

3- When an impurity changes into something else e.g. when the dung of a donkey is burnt, changing into ashes - then it becomes pure through this change.