Covering the whole body with water.

Covering the whole body with water in a particular manner with the intention of worshiping Allah, Exalted and High is He.

It is a thick white liquid which exits in spurts due to sexual stimulation and is followed by a loss of strength. Its scent resembles that of a rotten egg. The need for a ghusl is stated in Allah’s saying: “If you are in a state of janaba (ritual impurity), purify yourself (bathe your whole body).”(Al-Ma’idah:6)

And the Prophet’s ﷺ saying: “When you ejaculate, take a ghusl.” [ narrated by Abu Dawud.]

1- If a person has a wet dream yet doesn’t ejaculate, he does not have to make ghusl.

2- If he wakes up and doesn’t remember having a wet dream, yet he finds semen on himself, clothes, bed, etc. he must take a ghusl. The Prophet ﷺ said, “Water is only from water.” [ narrated by Muslim.] In other words the emission of semen - willfully or unwillfully - necessitates a ghusl.

3- If he feels semen moving in his penis, yet it does not exit, he does not have to make a ghusl.

4- If it exits due to some sort of sickness and not from sexual stimulation, then he does not have to take a ghusl.

5- If his state necessitated a ghusl, and he took a ghusl, but then semen exited immediately after the ghusl, he is not obliged to take another ghusl. He only has to make wudu’.

6- When a person wakes up from sleep and notices wetness on his clothes whose cause he can’t remember, then the following three conditions are possible:

a) He is sure that the wetness is semen. Then, it is obligatory on him to take a bath, whether he remembers having a wet dream or not.

b) He is sure it is not semen. In this case there is no need to take a bath. The ruling thus will be that of urine (i.e. wudu’).

7-If he sees semen on himself, but cannot remember when it was produced, it is compulsory to take a bath and repeat the Salah (prayer) from the last time he slept.

It is the meeting of the male and the female sexual organs. This is by the insertion of the head of the male’s penis into the female’s vagina. This is sexual intercourse even if ejaculation doesn’t occur. The Prophet ﷺ said: “When the circumcised penetrates the circumcised, bathing is compulsory.” [ narrated by At-Tirmidhi.]

3. When a non-believer becomes a Muslim

This is because “the Prophet ﷺ ordered Qais Ibn ‘Asim t to take a bath when he became a muslim.” [ narrated by Abu Dawud.]

4. At The End of a Menstrual Cycle or Post-natal Bleeding

This is in accordance with the hadeeth related by A’ishah (may Allah be pleased him), when the Prophet ﷺ told Fatimah bint Abi Hubaysh: “When menstruation starts (you should) stop praying, and when it leaves, take a (purificatory) bath, then start praying again.” [ agreed upon.] It’s the consensus of the scholars of Islam that post-natal bleeding is like menstruation.

This is according to the statement of the Prophet ﷺ when he told those preparing Zaynab (his daughter) for burial: “Wash her three times, five times or more if you think (it is necessary).” [ agreed upon.]

The obligation in taking a ghusl is to wash the entire body with water with the intention of purification. This can be done in any manner possible, but emulating the way of the Prophet ﷺ is recommended.

This is the way the Prophet ﷺ took a bath, as described by one of the Mothers of the believers, Maymunah (may Allah be pleased with her): “The Prophet ﷺ placed water for bathing on the ground and then used a handful of water to rub his right hand over his left hand twice or thrice. He then washed his private parts and then beat his hands on the ground or against the wall twice or thrice. Next, he rinsed out his mouth and nose, and washed his face and arms. After that he poured water over his head and then washed the remainder of his body. Finally, he moved aside and washed his feet. Then she said: “Then I offered him a piece of cloth to wipe his body, but he refused (to take it). He wiped the remaining water off his body using his hands.” [ narrated by Al-Bukhari.]

Thus, the description is as follows:

1- The hands are washed twice or thrice.

2- The private parts are washed.

3- The hands are beaten on the ground or against a wall two or three times.

4- Wudu’ is performed with the exclusion of the head and feet.

5- Water is poured on the head

6- The remaining part of the body is washed.

7- The legs are washed after moving slightly to the side. 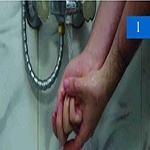 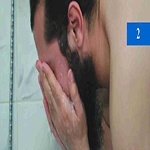 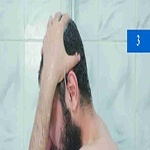 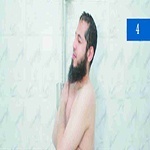 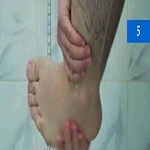 1- If a womans hair is braided, she’s not obliged to undo her braids to perform a ghusl. This applies to purification from a menstrual cycle or janabah. It is enough for her to pour water over them while making sure water reaches the roots of her hair.

2- It is recommended for the woman to take a piece of cotton/tissue, put musk on it and wipe the path the blood used to take after she has bathed due to her menstrual cycle stopping.

3- If a muslim makes a ghusl to purify himself from major hadath and prays, his prayer is valid, whether he intended wudu’ with it or not.

Allah said: “O you who believe! Approach not As-Salat when you are in a drunken state until you know (are aware) of what you utter, nor while you are in a state of janaba, except while travelling on the way (where there is not enough water, or just passing through a mosque), until you take a bath.” (An-Nisa’:43)

The Prophet ﷺ said, “Circumambulation of the Ka’bah is a form of As-Salat (prayer).” [ narrated by An-Nasa’ee.]

Allah Says: “None shall touch the Qur’an except the purified.” (Al-Waqiah:79)

The Prophet ﷺ also said: “None should touch the Qur’an except the person who is in a state of purity.” [ narrated by Malik in Al-Muwatta’.]

Ali t narrated that the Prophet used to recite the Qur’an upon leaving the toilet and he would eat camal meat with us. Nothing prevented him from reading Qur’an except being in a state of Janabah.” [ narrated by At-Tirmidhi.]

5. Staying in The Masjid (Mosque) - except for a traveller

Allah says: “O you who believe! Approach not As-Salat (the prayer) when you are in a drunken state, until you know (the meaning) of what you utter, nor while you are in a state of janaba (i.e. in a state of sexual impurity and have not yet taken a bath), except while travelling on the way (where there is not enough water, or just passing through a mosque), until you take (the prescribed) bath.” (An-Nisa’:43) 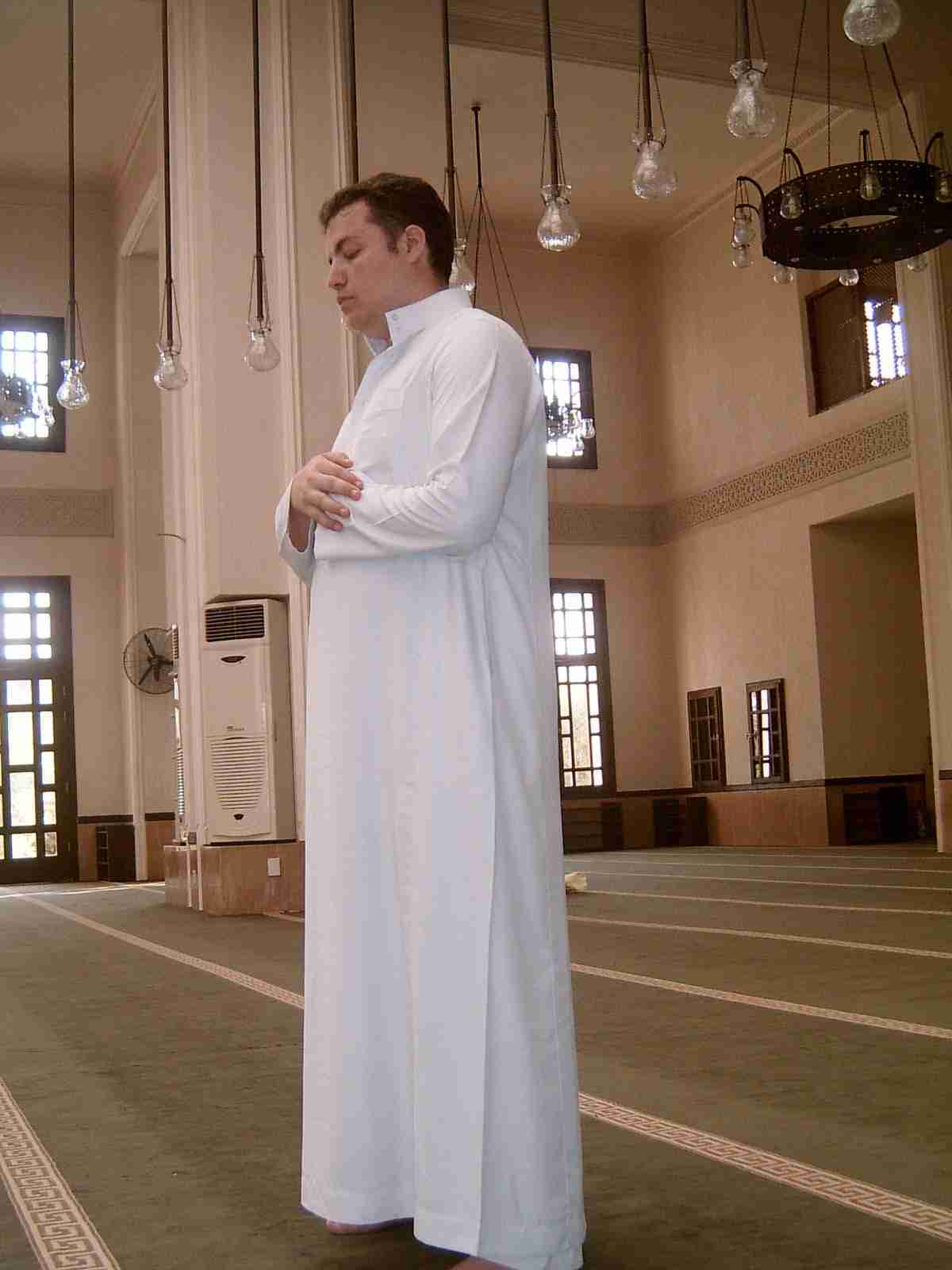 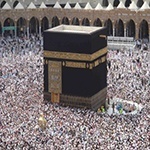 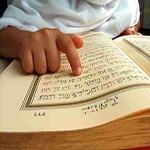 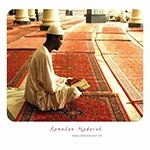 Staying in the Mosque 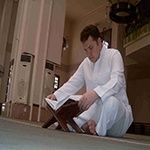 The Prophet ﷺ said: “Whoever makes wudu’ on Jum’ah has done well, and whoever takes a bath, taking a bath is better (for him).” [ narrated by Abu Dawud.]

2. Taking a Ghusl before Assuming the State of Al-Ihram for Umrah or Hajj.

Zaid Ibn Tha’bit t said : “I saw the Prophet ﷺ take off his regular clothes and take a bath (for hajj).” [ narrated by At-Tirmidhi.]

3. Taking a Bath after Washing The Dead.

4. Taking a Bath after Each Round of Sex.

Abu Raf’i  said, “The Prophet ﷺ visited all his wives and had sexual intercourse with each one of them in a single night, and he bathed after each wife’s visit. Then I said to him: ‘Why not take a single bath, O Messenger of Allah?’ He replied: ‘This is cleaner and purer.’” [ narrated by Abu Dawud.]

Things that aren’t Correct to do

1. Delaying a ghusl until the time of a prayer is about to leave.

2. For a female not to pray an obligatory prayer after her menstrual cycle stops.

For example, her cylcle stopped before the period of zhur was over and the time ramaining for that prayer was enough to pray one raka’a of prayer. In this case it is obligatory on her to take a bath and pray zhur. The Prophet ﷺ said: “He who performs a raka’a of Subh prayer before the sun rises, has met (the time for) Salatul Subh. And he who performs a raka’a of Asr prayer before sunset, has met (the time for) Salatul ‘Asr.” [ agreed upon],

Wiping over socks, casts, and bandages for wudu (ablution)
Purification