The Literal Meaning of At-Tayammum

Intending and striving towards something.

The Meaning of At-Tayamum in Islamic Law

Wiping the face and hands with clean soil, with the intention of purification.

At-tayammum becomes compulsory in the abscence of water, the inability to use water, or when a risk is attached to using water to purify oneself for worship like As-Salah. However, at-tayammum is only recommended for acts for which purification is only recommended, like reading the Qur’an.

1- Allah says : “ ... and when you don’t find water, then perform at-tayammum with clean earth and rub your faces and hands with it.” (Al-Ma’idah:6)

2- The Prophet ﷺ said: “I have been given five things which have not been given to anyone else before me: Allah made me victorious by causing my enemies to fear me up to a distance of one month’s journey, and the earth has been made for me (and my followers) a place for praying and a means to perform Tayammum (to purify oneself for prayer). Therefore, anyone (of my followers) can pray (anywhere) and at any time that the Salat (prayer) is due.” [ narrated by Al-Bukhari.]

Justification for The Permissibility of At-Tayammum

1- It is a facilitation for the Nation of Muhammad ﷺ.

2- A prevention of danger that is likely to occur when water is used in some conditions, like sickness, extreme cold, etc.

3- Enabling one to worship continuously, without stopping as a result of a lack of water.

1. During the scarcity of water or its unavailability

Allah, The Most Exalted, says: “... and you find no water, perform At-Tayamum.” (Al-Ma’idah:6) But it’s said that a person is not considered as having a lack of water when he has not searched for it.

2. When one is incapable of using water, even when it is available

For example, a sick and/or an eldery person who cannot move and has no one to help him/her perform wudu’. 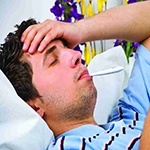 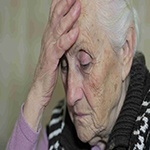 3. When one fears he will be harmed by using water

a- A sick person whose use of water (for pruificaton) may aggravate his sickness;

b- A person experiencing extreme cold and does not have the means to warm water, coupled with a strong fear that he may fall sick from the use of cold water.

This is because the Prophet ﷺ approved of the action of Amr Ibn Al-‘As when he led his people in prayer and he had performed at-tayammum due to the extreme cold.[ narrated by Abu Dawud.]

c-Someone far away from others or on a long journey with no water except a little for him to drink and he is not able to get other water.

1- Strike the soil with both hands, once.

2- Then blow into the palms of the hands to reduce the particles therein.

3- Next wipe the face with the palms, once.

4- Then wipe the back of both hands, by wiping the back of the right hand with the palm of the left and vice versa. The proof for at-tayammum and its description is the hadeeth of Ammar. He said: “Indeed the Prophet ﷺ struck the earth lightly with the palms of his hands, then blew in them (to blow off the extra dust) and wiped his face and hands with them.” [ agreed upon.] 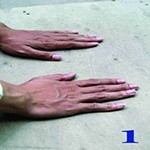 He strikes the dirt (earth) with both of his hands once. 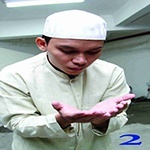 He blows excess dirt from his hands. 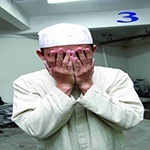 He wipes his face with both hands. 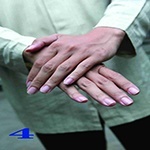 He wipes his left hand with his right hand. 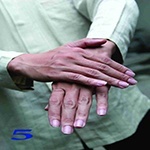 He wipes his right hand with his left hand.

4- Sequentual order, starting with the face and then the hands.

5- Briskness, by wiping the hands immediately after the face.

2- Occurrence of any one of the nullifiers of wudu’, like passing wind.

3- Occurrence of what necessitates bathing, like having a wet dream.

4- Absence or discontinuation of any reasons, e.g. sickness etc, that make at-tayammum permissible instead of wudu’. 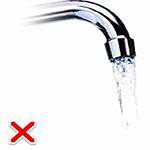 The Presence of Water

It has been Proven Scientifically

That the soil of the earth contains a purifying matter. This matter has the ability to remove germs, microbes, and viruses.

1- Making at-tayammum after relieving oneself - in the event that one is unable to use water - and praying is better than praying with wudu’ while forcefully retaining urine and feces.

2- It is permissible to perform at-tayammum by using a wall, prayer mat etc., if soil or dust is present on them.

3- It is permissible for the person who performs at-tayammum to pray as many obligatory or optional prayers as he wishes, as long as the at-tayammum remains intact.

4- It is correct for the person who performed at-tayamum to lead the one who has performed wudu’ in Salat. The Prophet approved of the action of Amr Ibnul-‘As when he led his people in prayer after performing at-tayammum due to the extreme cold.[ narrated by Abu Dawud.]

5- The person that performed at-tayammum and prayed, but then finds water before the time of that particular prayer finished, doesn’t have to repeat his or her prayer.

On the authority of Abu Sa’eed Al-Khudri t, who said: “Two men went on a journey and when the time of Salah (prayer) came they had no water to perform wudu’. They both performed at-tayammum from pure earth and then prayed. Thereafter, they found water within the time of the Salah. One of them repeated his Salah after performing wudu’ but the other didn’t. Afterwards, they both reported the incident to the Prophet ﷺ and he said to the one who did not repeat his prayer: “You followed the Sunnah (i.e. what you did was correct and in accordance with my way) and your prayer sufficed you.” He then said to the other companion who repeated his prayer: “You have a double reward.” [ narrated by Abu Dawud.]

6- The person who performed at-tayammum but finds water before or while offering As-Salah, must make wudu’. The Prophet ﷺ said: “Indeed, clean earth is a source of purification for a Muslim, even if he does not find water for ten years. But, whenever he finds water, he should wipe his skin with it, because that is good for him.” [ narrated by At-Tirmidhi.]

8- The one who lacks the two forms of purification (water and soil) should pray without purification when the time for As-Salah starts, and he doesn’t need to make up the prayer later on when he does find something to purify himself with. Allah, The Most Exalted, says: “... and fear Allah as much as you can...” (At-Taghabun:16)

9- It is permissible to delay at-tayammum until the last period of a particular Salah for someone who expects to find water. But when hope of finding water is lost, it is recommended to perform it early in its time; the best As-Salat is the one said at its prescribed time.

10- If a person fears that the period for a particular Salah might elapse and thus performed at-tayammum while water was available, the Salah is not valid. It is compulsory for him to perform wudu’ even if the time for the Salah may elapse.

The Rulings of Relieving Oneself
Purification