Firstly: The Integrals of As-Salah

The Integrals (or Pillars) of As-Salah

Its basic, essential components which it is composed of; to such an extent that it is not permissible to not perform them in any situation. This means that they are not to be left out intentionally or unintentionally; except when there is a case of incapacity.

2- Standing in obligatory Salat (with ability to do that)

3- Initiating or the first Takbeer

7- Prostrating on the seven parts

8- Sitting between the two prostrations

9- Sitting for the final at-Tashahud

11- Reciting blessings on the Prophet ﷺ during the final at-Tashahud.

13- Serenity when performing every essential part of Salat.

14- Performing all of the above-mentioned essential parts in sequence

What should someone who leaves out an essential part of Salat do?

1-As for he who left it out deliberately, his Salat is nullified, and it is compulsory on him to repeat it (as a whole).

2-However for him who left it due to forgetfulness, his situation may be due to either of the following two conditions:

a- For him not to remember this omission until after getting to the same point in the following rak’ah: At this point, he will not count the former rak’ah from which he omitted this part, but will assume the current rak’ah in place of the former. Thereafter, he prostrates for forgetting.

- An Example: A man remembers in the second Rak’ah while reciting the Fatihah that he forgot to recite the Fatihah in the first Rak’ah. Now this Rak’ah becomes his first and the actions which were performed before it are not taken into consideration.

b- That he remembers that he forgot a pillar from a rak’ah before reaching the same pillar in the following rak’ah. In this case he must return to perform that pillar as soon as he remembers it.

- An example: A man forgets to make Ruku’ then prostrated immediately after completing his recitation. Thereafter he remembered whilst in prostration that he had not made Ruku’. Now he must stand, make the Ruku’ and continue praying the rest of the prayer as normal.

Secondly: The Obligatory Aspects of the Salah

The Obligatory Aspects of the Salah

Those which one makes up by performing the prostration of forgetfulness, and do not have to be made up when one forgets.

3- Saying: “Sami’allahu liman hamidahu” by the imam and person praying alone. However saying it is not prescribed for the person(s) observing Salat behind the imam.

5- Saying: “Subhana Rabbiyal ‘ala” during prostration

6- Saying “Rabbighfirlii” in between the two prostrations

7- Sitting down to recite the first Tashahhud.

What should a person who omits one of the compulsory acts of Salat do?

1- The prayer of the one who deliberately omits it is void. Thus, he is to repeat the prayer all over again.

2- As for the person who forgetfully omits it, his prayer is valid. However, he just prostrates (prostration for forgetting) twice before at-tasleem.

Everything mentioned in the manners of Salat, apart from the conditions of Salat and its essential and compulsory parts, are all recommended acts. Omitting any of this does not affect the validity of Salat; and it is not mandatory to prostrate due to forgetting when any of them is left out. The recommended acts of Salat are of two types:

1- Al-Istiftah: It is the invocation said (silently) before reciting Fatiha.

4- Any at-tasbeeh (e.g. subhana rabbiyal a’ la) said after the first one during bowing and prostration.

5- Saying: “Rabbighfirli” other than the first one, in between prostrations.

6- Whatever is said after “Rabbana wa lakal hamdu” while rising from bowing position.

They are numerous, and include:

1- Raising the hands while saying the initiating Takbeer, just before bowing, rising from bowing and when rising to perform the third rak’ah.

2- Placing the right hand over the left while standing before and after bowing.

3- Casting the gaze towards the point of prostration.

4- Keeping the arms away from the stomach and one’s sides during prostration.

5- Al-Iftirash: This is a form of sitting, whereby one places the right foot upright, with the toes facing the direction of qibla, and lays the left foot on the ground while sitting on it. It is Sunnah to do so in all positions of sitting in salah except in the last Tashahud of a salah of more than two rak’ahs.

6- At-Tawaruk: This is a form of sitting where one places the right foot upright, with the toes facing the direction of qiblah, and places the left foot under the right leg, with the left foot coming out from underneath the right leg, from the right, and at the same time sits on his posterior with his left thigh on the ground, supporting him. It is sunnah to take this position during the last Tashahhud in salah of more than two rak’ahs. 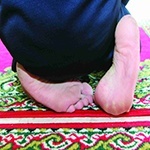 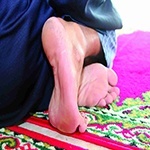 Download : The Integrals of Salah, its Obligatory aspects, and Sunnahs - Salat - Book Illustrated Islamic Law for Acts of Worship

The Salat (observed) during Eclipses of the Sun (Salatul-Kusuf)
Salat