a. In the Voluntary Salah

However, if a person prays sitting down due to a valid excuse, he receives the full reward. This is due to the Prophet’s ﷺ saying: “If a man becomes sick or travels, it is written for him that which he used to do while in good health and not traveling.” [ Source: Al-Bukhari.]

b. In the Obligatory Salah

The obligatory prayer of a person who is able to stand is not valid if it is prayed from a sitting position. 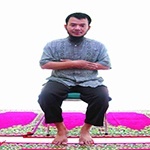 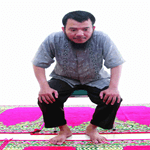 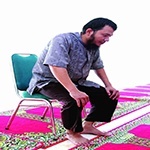 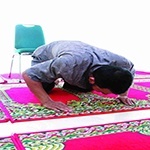 Some Rulings Related to the Intention ..

It is not permissible to intend to stop the prayer during the middle of the Salah; so whosoever intends to stop his prayer, he has actually left the prayer. He must then start his prayer all over again.

Whoever begins his prayer as a voluntary one may not switch his intention to make it an obligatory one.

Whoever has made the intention to pray an obligatory Salah alone, and then a group comes to pray it, may switch his intention to make the prayer a voluntary one. In this case he finishes two raka’at, and then joins the group.

It is obligatory for the person praying to recite surah Fatihah, even if he is following the imam in an audible Salah. It was reported on the authority of ‘Ubadah Ibn As-Samit t,, who said: “We were behind the Messenger of Allah ﷺ in the Fajr prayer and the Prophet recited, but then he found some difficulty in doing so. When he finished he asked: ‘Perhaps you all recite behind your Imam ?’ We said: ‘Yes it is so, O Messenger of Allah.’ He said: ‘Do not do this, except with the Fatihah as there is no Salah without the Fatihah.’” [ Source: Abu Dawud.]

The evidence of this is in the Prophet’s saying: “If the imam says ‘Ameen’, then say ‘Ameen’; for indeed whosoever’s ‘Ameen’ corresponds with that of the angels, their previous sins will be forgiven.” [ Source: Al-Bukhari.]

5- The Places Where the Imam Remains Silent

1- Between saying the opening ‘Allahu Akbar’ and the recitation of the Fatihah (in order to recite the opening invocations in a soft voice).

2- It has not been established in the Sunnah that the imam remains silent between the Fatihah and the surah recited after it.

3- A silent moment after ending ones recitation; before bowing (Ruku’).

6- Reciting Aloud when making up Obligatory and Non-Obligatory Salah

If a person misses a Salah and he wants to make it up, should he recite it aloud or in a soft voice? It depends on which prayer it is; and not the time in which one makes it up.

Therefore if one makes up a prayer normally made aloud, he recites it aloud when making it up during the daytime.

It is Sunnah to recite voluntary prayers in a soft voice except when there is evidence saying that it should be aloud, for example in Taraweeh and the Eclipse Prayer.

One raises his hands in the following places:

3- When standing from Ruku’

4- When standing after the first Tashahhud

If the follower is able to pray the Ruku’ with the Imam (when first entering the congregational prayer), then he is considered to have prayed this entire Rak’ah (unit of prayer). This is due to the Prophet’s saying: “Whoever makes the Ruku’, has caught the Rak’ah.” [ Source: Abu Dawud.]

9- Staying Still After Reaching Any Position

10- Moving Ones Tongue When Saying Anything

It is not enough when reciting the Qur’an or pronouncing At-takbeer and words of Allah’s remembrance to say them just by one’s heart during Salat. Indeed, it is compulsory to utter the words by at least moving the tongue and lips during the recitation.

11- The Manner of Prostrating

Prostration is on seven bones, as evidenced from the Prophet’s ﷺ saying: “When a servant (of Allah) prostrates, seven parts prostrate with him; his face, his palms, his knees, and his two feet.” [ Agreed upon.] 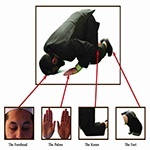 12- Pointing with the Finger

The tradition of the Prophet is to point with the (index) finger while reciting at-Tashahud. This is according to the hadeeth reported by Wail Ibn Hujr ,: “Then he ﷺ raised his finger and I saw him moving it and supplicating (while pointing) with it.” [ Source: An-Nasaee.]

- Add ‘wash-shukr’ after saying ‘Rabbanaa lakal-Hamd’; since this has not been established from the Messenger of Allah (may the peace and blessings of Allah be upon him.)

- Add the word ‘Sayyidunaa’ in the Tashahhud or when saying prayers for the Prophet in Salah.

-Shake hands with others who have just finished praying and saying “Haram”, “Jama’an”, or similar words.

- Say after anyone reads the verse of the Throne after the prayer: “Glory be to Allah, so glorify Him,” or similar acts.

- Wipe the face after supplication and remembrance of Allah (Adhkar)


Tags: how to perform sajdah of Quran prostration benefits