Definition of the Adhan and the Iqamah

Announcement of the beginning of a certain time, during the day or night, pertaining to a particular prayer, by means of specific invocations.

Announcement of the commencement of prayer with specific invocations.

The Rulings of the Adhan and the Iqamah

1- With Regards to the Congregation

This is the case when they are at home or on a journey, because both of them are open symbols of Islam. Therefore, it is prohibited to forsake or ignore them. The Prophet ﷺ said: “And when Salah approaches, let someone among you make the call to prayer for you, then let the oldest among you lead (the prayer).” [ Agreed upon.]

2- With Regards to the Solitary Individual

It is a Sunnah, as Uqbah ibn Aamir t, said: “I heard the Messenger of Allah ﷺ saying: “Your Lord is amazed at a goat shepherd at the peak of a mountain[ The midst of mountain peaks] who calls the adhan and prays. Allah says, ‘Look at this servant of mine, he proclaims the call to prayer, announces the commencement of prayer and then prays, fearing Me. I have forgiven him all of his sins.” [ Source: An-Nasa’i.]

The Wisdom Behind the Adhan

1- Announcement of the beginning of the time for the particular prayer and the place to observe it.

3- Notifying the unmindful and reminding the forgetful to observe As-Salah, which is one of the best graces. 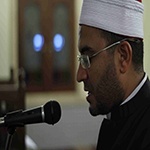 When was the Adhan Legislated and for what Reason?

The Adhan was legislated in the first year of Hijrah (emigration from Makkah to Madinah). The reason for this was that there was a need for a sign which would be recognized by everyone signifying the arrival of the time of the prayer. So the Muslims consulted one another about this. Subsequently, at night-time Abdullah ibn Zayd saw a man in a dream carrying a bell. He (Abdullah) said to him, “Will you sell this bell?” The man replied, “What will you do with it?” Abdullah said, “We shall make a call to prayer with it.” The man said: “Shall I show you what is better than that?” Abdullah said: “Yes.” The man taught him the Adhan, and then he taught him the Iqamah.[ Source: Ad-Darimi.] Abdullah said, “When I woke up, I went to the Messenger of Allah ﷺ and told him what I had seen.” Following that he ﷺ said, “That is surely a true dream, insha-Allah. Stand with Bilal and teach it to him, as he has a louder voice than you.” [ Source: Abu Dawud.]

The Virtues of the Adhan in Islam

The Conditions for the Validity of the Adhan

1- It must be made by a sane Muslim male.

3- The different sentences of the call must be said one after another i.e. There should not be a large gap between its words.

4-It should be said when the time of Salat begins.

The Sunnahs of the Adhan

2- Purification of the caller from both impurities (major and minor).

4- Placing his forefingers in his ears.

5- The caller should have a beautiful and loud voice.

6- Saying it with the proper pronunciation, articulating and chanting the words correctly, and also saying it patiently and calmly. 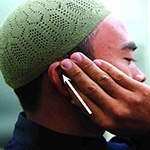 Placing his two forefingers in his ears

The Description of the Adhan and the Iqamah

What is recommended for the one who hears the Adhan

1- To say what the Mu′adhin says except when he says “come to prayer, come to success.” After these he should say: “La hawla wala quwwata illa billah.” Meaning: “There is no ability or strength except by that of Allah.” [ Source: Al-Bukhari.]

2- After the Adhan has finished, he should say: “Ash-hadu ′an la Ilaaha illallah wahdahu la shareeka lahu wa anna Muhammadan ‘abduhu warasuluh. Radeetu billahi rabban wabi Muhammadi nabiyyan wabil Islami deena.” Meaning: “I bear witness that there is no god worthy of worship except Allah alone, He has no partner, and that Muhammad is His servant and Messenger. I am pleased with Allah as my Lord, with Muhammad as my Messenger and with Islam as my religion.” [ Source: Muslim.]

3- To ask Allah to bestow His Blessings upon the Prophet ﷺ after the Adhan and then say: ‘Allahumma rabba hathihi-d-a’wati at-taamah wasSalatil qaimah ′Ati Muhammadanil waseelata wal fadheelah, wab’athul maqaama mahmudanil-lathi wa’adtah.” [ Source: Abu Dawud.] Meaning: “O Allah, Lord of this perfect call and the established prayer, grant Muhammad ﷺ intercession and favor, and raise him to the honored position you have promised him.”

Extra rules related to the Adhan and Iqamah

1- It is enough to make one Adhan when joining two prayers, like Dhuhr and ‘Asr prayers, but the Iqamah must be made twice i.e. for each prayer.

2- When the Iqamah is made, but the establishment of the Salat is delayed, there is no need to announce another Iqamah when one eventually prays.

3- The Mu′adhin should try to avoid mistakes in the wordings of the Adhan. Some of these mistakes are:

a- The words: “Allahu Akbar” (with an elongated ‘Alif’ in the beginning). (Meaning: Is Allah the Greatest?) - as if one is asking a question.

4- One should not start praying a Nafilah (supererogatory prayer) after the Iqamah has been pronounced; but if one has already started a Nafilah before the Salah is established (by making the Iqamah), one can complete it (the nafilah), if just a little part remains. However, if there is still much left to pray, he should discontinue the nafilah – without Taslim – and join the Imam in the obligatory prayer.

5- The Adhan of a young child who is old enough to be aware of matters is allowed and accepted.

6- Adhan and Iqamah are prescribed for prayers missed due to sleeping or forgetting. This was established from the Prophet ﷺ when the Companions slept passed Fajr prayer until the sun had risen. The Prophet ﷺ commanded Bilal to make the Adhan then they performed ablution and prayed two Sunnah raka’ah of Fajr prayer ”dawn” (i.e. nafilah), then he (the Prophet ﷺ ordered him to announce the Iqamah and then he (the Prophet) led them in prayer. [ Source: Abu Dawud.]

7- He who is already in the mosque should not leave it after the Adhan has been made except for some necessity. It has been narrated on the authority of Abu Hurayrah t,, who said: “The Messenger of Allah ﷺ ordered that none of us should leave the Mosque when the call to prayer has been made, until he observes the prayer.” [ Source: Ahmad.]

8-It is Sunnah for the Mu′adhin to first lower his voice when saying the parts (starting with Ashadu) that describe the testimony (twice), and then straight away repeat the same with a raised voice. This is due to what was established in the tradition of the Prophet. [ Source: Abu Dawud.]

1- The person should not pronounce the words incorrectly in the Athan, or sing it, as this changes the consonants and vowels, making the pronunciation of the letters shorter or longer than they should be.

2- Raising the voice while praying for blessings for the Prophet ﷺ after the Adhan.

- The Adhan of Fajr

Two Athans (i.e. the call to prayer is said twice) are prescribed for Salatual-Fajr, the first before the imminence of the time, and the second at the arrival of the time (for Salat). It is therefore prescribed to say: ‘prayer is better than sleeping’ (twice) during the first call. This is due to the saying of the Prophet ﷺ (while instructing Bilal): “When you make the first call for Salat ul-Fajr (i.e. the dawn prayer), you should say: “prayer is better than sleeping” (twice).” [ Source: Abu Dawud.]

1- It is not permissible to leave the Masjid after the Adhan and before the Iqamah have been announced due to the Hadith of Abu Hurairah t, who said, when a man saw another crossing through the masjid to leave after the Adhan (had been called): ‘As to this person, he has disobeyed Abul Qasim (the Prophet Muhammad).’”

2- No Adhan or Iqamah is made for any supererogatory prayer. This is the case for the ‘Eid prayer, prayer for rain, prayer of eclipse and the funeral prayer, except that the Mu′adhin says in the eclipse prayer: “As-Salat u Jaami’ah”.

3- When it is raining heavily or the weather is very cold, the person making the Adhan says, after saying ‘hayya ‘alal falah’, “A laa Salloo fee rihaalikum.” Which means that it is allowed to make the prayer at the place of work, next to one’s house or wherever he is, due to the extreme weather conditions and the inability to come to the mosque.

The Adhan Chases the Devil Away

On the authority of Abu Hurairah t,, who said: “The Messenger of Allah ﷺ said: ‘When the call to Salah is made, the Shaytan goes away, passing wind; so as not to hear the Adhan. Then when the Adhan is finished, he returns heading towards the people. This is also the case with the Iqamah; when it is called he leaves and when it is completed he returns until he manages to mingle between a man and himself, telling him to remember this and remember that (concerning things which the person had forgotten), to such an extent that a person reaches the point that they do not know how many rak’ahs they have prayed. In this instance, if it is unclear how many he has prayed; three or four, let him prostrate twice while sitting (at the end of the prayer).’”[ Source: Al-Bukhari.]

Download : The Adhan and The Iqamah - Salat - Book Illustrated Islamic Law for Acts of Worship


Tags: azan prayer time how to pray in islam

The Sutrah (partition in front of one who is praying)
Salat