Definition of the Forgetfulness Prostration

It is two prostrations that someone who prays observes to correct a mistake that has occurred as a result of forgetting something in his Salat.

Causes of the Prostration for Forgetting

The causes of the Prostration for Forgetting are three: Doubt, Addition and Omission.

What is meant by it here is being uncertain whether two things have actually occurred or not.

Doubt, with regards to Salat, is divided into two categories:

1- Doubt after the completion of the Salat:

This form of doubt should not be given consideration.

For example, a man doubting, after observing Fajr prayer, whether he prayed two or three raka’at? He is not to bother himself about this doubt, except if he is sure (of either), then he acts according to what he is certain about.

2- Doubt during the Salat:

This type of doubt occurs in one of two situations:

a- When one of the possibilities is more likely:

In this situation, he acts on what he feels is more likely, then prostrates due to forgetting, after (making) the final Salam. For example: A man observing adhuhr prayer doubts whether it is the second or third rak’ah, but in his opinion, it is the third. He makes it (that rak’ah) the third, completes his prayer and then prostrates for forgetting after making the final Salam.

The evidence for this lies in the Prophet’s ﷺ statement: “When any of you is in doubt regarding his Salat, he should try as much as possible to choose the most correct (and then proceed in his Salat). Thereafter, he says at-Tasleem. Finally (after saying at-Tasleem), he should prostrate twice.” [ Ibn Hibban.] 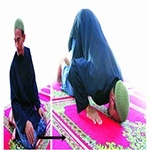 Saying the Salam then Prostrating for Forgetting

b- That none of the two options are more likely than the other in his opinion.

In this case, he chooses the least of the two options and completes his Salat from thereon. Thereafter, he prostrates for forgetting before saying the Tasleem.

- For example: A man praying Dhuhr prayer had doubts concerning a rak’ah, whether it was the second or third, but not one of the two was more likely in his view. In this case, he chooses the least of the two options, so considering it the second rak’ah. He completes his Salat and thereafter prostrates for forgetting before (making) at-Tasleem.

The proof of that is the statement of the Prophet ﷺ: “When any of you have a doubt in his Salat and does not know how many he has prayed, whether three or four, he should cast aside his doubt and complete his Salat based on what he is sure about. He then prostates twice before saying the final Salam.” [ Source: : Muslim.]

Prostrating for Forgetting then Saying the Salam

This is when a person observing Salat adds an extra bowing, prostration etc. in his Salat. The occurrence of an addition in Salat also falls under one of two conditions:

1- That the person remembers while making the addition:

In this case, it is compulsory for him to stop making the addition, complete his Salah normally, and then prostrate for forgetting after saying the final Salam. For example, a man observing Dhuhr prayer stands to observe a fifth rak’ah, but remembers (that he is on the fifth rak’ah) during the course of observing the (additional) rak’ah. In this case, he must sit down quickly to complete his Salah, and he then prostrates for forgetting after saying the final Salam.

2- For the person to remember after completing the addition

In this case, he completes his Salah, he then prostrates for forgetting after saying the final Salam. The proof of this is based on the hadeeth of Ibn Mas’ud t, who said: “Indeed the Prophet ﷺ once observed five raka’at for Dhuhr. Someone said: ‘Has the (number of) Salah been increased?’ The Prophet inquired: ‘What do you mean?’ He (the questioner) said: ‘You observed five rak’ahs.’ Upon that, he (the Prophet) prostrated twice after he had said the final Salam.” [ Source: Al-Bukhari.]

This occurs when a person observing Salah omits one of the essential or compulsory parts of Salah.

a-That the one who prays remembers (the omitted part) after reaching the same point in the next rak’ah:

In this case, he nullifies the rak’ah from which he omitted this part, but will count the current rak’ah in its place (i.e. in the place of the former).

- Example of that: A man forgets to bow in the first rak’ah, but remembers, while in the bowing position in the second rak’ah, that he omitted bowing in the previous rak’ah. At this point, he makes the current rak’ah his first, and will not count the previous (i.e. the rak’ah without bowing). From this point, he completes his Salat. Thereafter, he prostrates for forgetting after making the final Salam. 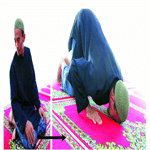 Saying the Salam then Prostrating for Forgetting

b- For him to remember the omission before reaching the same point in the following rak’ah:

In this case, it is compulsory for him to return to the omitted part, offer it and then re-offer the actions after it (in the correct sequence). Following that, he completes his Salah, then prostrates for forgetting after making the final Salam.

- For example: A man who forgets the second prostration and the sitting before it in the first rak’ah, but remembers this after rising from bowing in the second rak’ah. He should return (to the omitted part), sit down, prostrate and then complete his Salat. Thereafter, he prostrates for forgetting after making the final Salam.

2- Omission of a (Wajib) Compulsory Part

When a person observing Salat leaves out a compulsory part of Salat, then his case is one of the following three conditions:

a- For him to remember it before leaving his place in the Salat;

In this case, he offers the omitted part at that instant, and needs not do anything to make up for it.

b- For him to remember it after he has left its point in the Salat, but before he reaches the next pillar after it:

In this case, he returns to offer it, completes his Salat, then prostrates for forgetting after making the final Salam.

c- For him to remember it after reaching the next pillar:

In this case, he continues his Salat and will not return to it (i.e. the omitted part). He shall, however, prostrate for forgetting before the final Salam.

- For example: A man starts to stand up to the third rak’ah after making the second prostration in the second rak’ah, forgetting the first Tashahud, but he remembers, before he rises up, that he omitted the Tashahud. In this case, he is to remain seated and should recite the Tashahud. He then completes his Salat and does not need to prostrate at the end.

On the other hand, if he remembers after rising, but before he has fully stood up, he is to go back and sit down to recite the Tashahhud, and then complete his Salat, thereafter prostrating for forgetting after (making) the final Salam. However, if he remembers after standing up completely, it is therefore not compulsory for him to return for the Tashahhud. He completes his Salat and prostrates for forgetting, before making the final Salam.

The proof on these is based on the hadeeth of Abdullah Ibn Buhaynah t, who said: “The Prophet ﷺ led them in Dhur prayer, then he rose, without sitting down, from the second rak’ah, and the people joined him (in standing up). When he finished the prayer and people expected him to make at-Tasleeem, he said a Takbeer while sitting, then prostrated twice before saying the final Salam. Finally he made the final Salam.” [ Source: Al-Bukhari.]

The above illustrates to us that prostration for forgetting is either before or after making the final Salam.

Description of How to Perform Prostrations for Forgetting

1- If the person observing Salat says the final Salam before completing the prayer and does not remember that he did not complete it until after a long time, he is to re-offer the entire Salat. However, if he remembers after only a short while, for example after two or three minutes, he has to then just complete what he forgot of his Salat, thereafter prostrating for forgetting after completing the prayer.

2- It is mandatory for the person praying behind an imam to follow him in his prostration for forgetting, even if he joined him after (the cause) for forgetting. 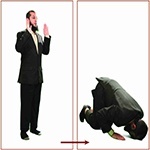 The Initiating Takbeerah then Prostrating for Forgetting

The Prostration of Gratitude

It is the prostration for giving thanks to Allah for a blessing, joyous event, or due to the prevention of unwanted (situations or things).

Evidence for the permissibility of the Prostration of Gratitude is according to the hadeeth of Abu Bakr ,, who said: “Indeed the Prophet ﷺ used to fall into prostration, thanking Allah, whenever a pleasant happening befell him, or he was given a glad tiding.” [ Source: Abu Dawud.]

Description of Prostration of Gratitude

Being in a state of Wudu’ is not a condition to perform the prostration of thankfulness. The person simply says at-Takbeer, then prostrates saying “Subhana Rabbiyyal a‘la.” Then he gives praise to Allah and thanks Him for what He bestowed on him. He then rises from his prostration with neither at-Takbeer nor the final Salam.

Thirdly: Prostration due to Recitation

Prostration due to recitation

It is the prostration that the person reciting (or listening to) the Qur’an observes when he comes across a verse in which there is a prostration.

Proof for the permissibility of prostration due to recitation is what was authentically reported from Ibn Umar , who said: “The Prophet used to read to us Surahs in which there are prostrations, then he would prostrate and we (used to join him in prostration) too.” [ Source: Al-Bukhari.]

The prostration can also be done when a reciter passes by a verse in which there is prostration while observing Salat, whether (the one in which verses are recited is said) out loud or silently, or outside Salat. In any case, ablution is not a condition for the prostration out of Salah.

Description of the Prostration due to Recitation

Meaning: “My face is prostrated to He who created it and, due to His might and power, gave it hearing and sight.”

Meaning: “Oh Allah, write a reward for me due to it, and overlook my sins due to it, and store it away for me with You, as you have accepted it from your servant David.”

- He then says at-Takbeer and rises from the prostration if he is in Salat , and if he is not in Salat he rises with neither a Takbeer nor Tasleem.

The verses that contain words which warrant prostrations due to recitation are:

1- If a traveler riding on an animal recites a verse of prostration, he dismounts and observes prostration due to the recitation. However, if this is difficult for him, he bows his head low in lieu of prostration.

2- When a reciter repeats a verse for prostration several times, it is sufficient for him to observe prostration just once.

3- There is no sin in making prostration due to recitation during the period in which observing Salat is prohibited.

4- If a reciter does not prostrate, the listener should not prostrate either. This is because he (the reciter) is the one being imitated and whose recitation is being listened to.

5- The one who hears the recitation but does not have the intention to listen, like a passerby or one who is occupied with other things for instance, does not partake in the prostration. This is because he is not following the recitation of the reciter.

Download : Prostrations for Forgetting, Gratitude and due to Recitation - Salat - Book Illustrated Islamic Law for Acts of Worship

Salat of those with excuses recognized by the sharia
Salat