Definition of the Solar and Lunar Eclipse Prayer

Eclipse of the sun (Kusuf)

Obstruction of the light from the sun, or part of it, during the day

Eclipse of the moon (Khusuf)

Obstruction of the light from the moon, or part of it, during the night.

Wisdom behind the Eclipses of the Sun and the Moon

Both of them are two signs, among the numerous signs of Allah, which He uses to remind His servants, so that they can return to Him in repentance. The Prophet ﷺ said: “Indeed the sun and the moon are not made to eclipse because of the death of anyone nor his life (birth), but they are two signs from the numerous signs of Allah that He uses to frighten and remind His servants. Thus when they eclipse, then hurry to (perform) Salat.” [ Source: Abu Dawud.]

Rulings of Salatul-Kusuf and Salatul Khusuf

It is an emphatic Sunnah of the Prophet ﷺ, as evidenced from his ﷺ statement: “Indeed the sun and the moon are two signs among the numerous signs of Allah, they are eclipsed not as a sign of death of anyone or his birth. Thus, when you see (any of) this, then you should supplicate to Allah, say takbeer, observe Salat and give charity.” [ Agreed upon.]

- The time for this Salat is from the start of either of the eclipses until it ends.

- The person who observes the Salat should complete it, even if the eclipse has finished; but he is not to repeat the Salat if he completes the Salat while the eclipse is still happening, instead all the Muslims should continue to supplicate and seek forgiveness from Allah.

It was reported on the authority of A’isha (may Allah be pleased with her) who said: “An eclipse of the sun occurred during the time of the Messenger of Allah ﷺ, so the Messenger of Allah ﷺ led people in Salat. He stood and remained standing for a long time, he then bowed for a long time, he then rose and stood for another long time, but not as long as the first standing. He bowed again for a long time, but it was also shorter than the first one, and then he prostrated and prolonged the prostration. He did in the second Rak’ah as he had done in the first. Thereafter he completed the Salat. By then, the sun (eclipse) had cleared. Following that, he delivered a khutbah (a sermon). He praised Allah and glorified him and then he said, “The sun and the moon are two signs among the numerous signs of Allah; they are not made to eclipse due to the death or life of anyone. Thus when you see the eclipses, supplicate unto Allah and say takbeer, offer Salat and give sadaqah.” [ Source: Al-Bukhari.]

On this note, when an eclipse of the sun or the moon occurs: People are called to Salat by saying: “As-Salatu Jami’ah”. Meaning: “Come unto a congregational Salat”.

When people are gathered, the imam leads them in a long two-raka’at prayer, reading aloud in both. He recites al-Fatiha and a long chapter in the first rak’ah, he then bows and prolongs the bowing.

He rises saying “Sami‘al-lahu liman hamidah. Rabbana walakal hamd.” He then recites al-Fatiha and a long chapter, but not as long as in the first standing. He bows and prolongs the bowing, but not as long as the first. He then rises saying: “Sami‘al-lahu liman hamidah., Rabbana walakal hamdu”... continuing with the pray. He then prostrates two long prostrations sitting in between both, without prolonging this sitting; he then rises from the second prostration saying the takbeer. He observes the second rak’ah like the first one, in standing, bowing and prostration, but not equal in length. He then sits to recite at-Tashahud and says at-Tasleem thereafter.

1- It should be performed in congregation, but it is still acceptable if it is observed individually.

2- It should be in the mosque and women should not be prevented from attending it.

3- The Salat should be prolonged by elongating its standing, bowing and prostrations, except if the eclipse clears (disappears during Salat), when it should be completed quickly.

4- The second rak’ah should be shorter than the first in the standing, bowing and prostration.

5- The imam should give admonition to the people by reminding them about the power of Allah, explaining the wisdom behind the eclipse of the sun and the moon, and urging them to do good deeds and to avoid forbidden acts, all after the Salat.

6- To say several supplications, pleading with Allah, seeking forgiveness, giving charity and other good deeds, until Allah removes what has befallen the people.

7- It is permissible to raise both hands when supplicating during an eclipse of the sun. This is evidenced by the hadeeth of Abdur-Rahman bn Samrah , who said: “Then I went to see the Prophet (I saw him) while he was standing praying (at the time of the eclipse of the sun), raising his hands.” [ Source: Muslim.] 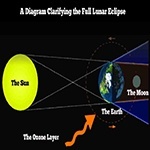 1- The Salat is not to be observed if the eclipse of the sun or the moon is known only after it has disappeared.

2- The modern scientific explanation for the cause of the eclipse of the moon or the sun does not nullify the fact that they are two signs among the numerous signs of Allah to cause fear and remind His servants of Allah’s Power. It is therefore expected of a Muslim to be occupied with worship and pleading unto Allah, but not be occupied with gazing at and monitoring the eclipse of the moon and the sun. Abu Bakr t, narrated that: “The sun eclipsed during the time of the Messenger of Allah ﷺ and he came out dragging his cloak...,” showing the great extent of his fear.

3- To catch a rak’ah of the Salatul kusuf one has to catch the first bowing. Whoever misses the first bowing, but catches the second bowing, has missed the whole rak’ah. He is to re-offer this (the missed rak’ah) in the manner of Salatul-Kusuf and Salatul-Khusuf after the imam has made Tasleem.

4- Salatul Kusuf can be observed even during the period in which observing Salat is prohibited.

5- It is not permissible to observe either Salatul-Kusuf or Salatul-Khusu by just hearing the news about it. One has to see it with ones eyes.

Download : The Salat (observed) during Eclipses of the Sun (Salatul-Kusuf) - Salat - Book Illustrated Islamic Law for Acts of Worship