The Right Person to Lead the Salat

In the following order:

First: The best reciter of the Book of Allah: This is the best of those who have memorized the Qur’an and the most knowledgeable of them about its rulings.

Second: The most knowledgeable of the Sunnah (traditions of the noble Prophet): He is the one who knows best its meanings and rulings.

Third: The first to observe Hijra. This is the one who emigrated first, from the state of infidels to an Islamic state. However if there is no migration, then the first of them to repent from sins

This order is to be followed when an imam is to be chosen for a mosque, or in the case where a congregation previously had no imam appointed to lead Salat in the mosque. However, when a congregation already has an imam, or the imam is the owner of the house, or he is one of those in authority [ The Sultan, President or the head of a place etc.], then he is to be considered before others. This is due to the saying of the Prophet ﷺ: “A man should not lead a man in his territory and should not sit in his house on his at-Takrimah[ At-Takrimah: What is usually provided for a visitor to sit on. ] (become his guest), except with his permission.” [ Source: Muslim.]

Position of the Imam and the Congregation

1- If there is only one follower; the Sunnah is to stand on the right side of the imam, next to him. This is according to the hadeeth of Ibn ‘Abbas t, who said: “I prayed with the Prophet at night and I stood on his left. The Messenger of Allah ﷺ thereupon held me by my head from behind and placed me on his right.” [ Source: Muslim.]

2- If the congregation is two or more, the imam stays in front of them at the center or midpoint of the row. This is according to the hadeeth of Jabir and Jabbar (may Allah be pleased with them) that one of them stayed on the right side of the Messenger of Allah and the other on his left. Ja’bir said: “Then the Messenger of Allah ﷺ held our hands together until he made us stand behind him.” [ Source: Muslim.]

3- Salat of the one who prays alone is to be behind the row. It is only valid in case there is an excuse, like the case of him not finding enough space in the congregational row for him to perform salat

Position of the Females

1- If women pray in a group (where there is no man around to be their imam), it is Sunnah for the woman leading the prayer to stand in the middle of them, in the same row; i.e. not stepping ahead of them.

2- The woman stands behind the man leading her, or behind the row of men when she prays with a group of men.

3- If a group of women pray with a group of men, the Sunnah is for them to stand back, away from the men; and some of their ranks are better than others, just like those of the men. This is due to that which Abu Hurairah narrated; that the Prophet (peace and blessings be upon him) said: “The best rank of the women is the last one, and the worst rank of the women is the first one.” [ Source: Ibn Majah.] 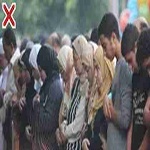 Some of the Rulings Related to Following the Imam

1- It is not valid for someone to follow the imam from his house by hearing his voice through a microphone or radio.

2- It is permissible to follow the imam when one is outside the masjid, if the one praying is in a row which is connected to those inside the mosque.

3- One may follow the imam even from the roof of the masjid or a position lower than that of the imam, as long as he can hear the imam’s voice.

4- A person who is praying an obligatory prayer may follow one who is making a voluntary one, and vice versa.

- An example of this is praying ‘Isha behind an imam who is praying Taraweeh, or praying with someone who missed the congregational prayer so that they also may get the reward of praying in a congregation.

This is apparent in the Hadeeth of Jabir Ibn ‘Abdillah, who said: “Mu’adh used to pray with the Prophet ﷺ and then go to his people and lead them in prayer.” [ Source: Al-Bukhari.] 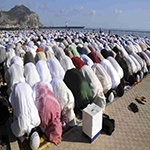 Following from Outside of the Masjid

Competing with the Imam

1- The legislated act for the led (person praying behind the imam) is to emulate the imam by doing everything he does immediately after him. This is according to the statement of the Prophet ﷺ who said: “The Imam is made to be followed. So when he says ‘Allahu Akbar’, then you should all say it (after him). When he bows, you all should bow and when he prostrates, you all should prostrate.” [ Agreed upon.]

2- To precede the imam (or even compete with him) is forbidden. The Prophet ﷺ warned severely of that by saying: “Does he who raises up his head before the Imam not fear that Allah will turn his head to that of a donkey, or turn his appearance into that of a donkey?” [ Agreed upon.]

3- Whoever precedes his imam unmindfully, it is compulsory for him to return and follow him.

It is not correct to pray behind al-Muhdith [ Al-Muhdith: a person who is not in the state of ritual purity.] (a person who is impure), except if the impurity is not known about until after the completion of the prayer. In this condition, the prayer of the one who prayed behind the imam is valid, but it is compulsory on the Imam to re-offer his Salat.

Download : Leading and being led in Salat - Salat - Book Illustrated Islamic Law for Acts of Worship