Definition of Sutrah in Islam

Making use of the partition is prescribed at home, on a journey, during obligatory prayer and supererogatory prayer, in the mosque and anywhere else; for what has been confirmed from the Prophet ﷺ that he said: “Whenever any of you is praying, let him pray toward a partition and let him move close to it.” [ Source: Abu Dawud.]

And on the authority of Wahb t, who said: “The Prophet ﷺ led us in Salah at Minna, so he placed a walking stick - which is a short-stick – in front of him (where he was praying), then he prayed two Raka‘at.” [ Source: Ahmad.]

Ruling on using the Sutrah

It is compulsory to place a partition. The Prophet ﷺ ordered the Imam and those praying alone to use the partition, and he stressed this point much. Therefore, it is obligatory for a Muslim to put a partition in front of himself while praying, and to prevent anybody from walking between him and the partition. This is due to the saying of the Prophet ﷺ: “Do not pray except towards a partition, and do not let anyone walk in front of you. But if he insists, then fight him.” [ Source: Ibn Khuzaymah.]

The Sutrah was prescribed for many reasons among which are:

1- Walking in front of a person praying is prohibited, because it thereby hinders his devotion.

2- Enabling the person praying to concentrate and think deeply while in Salat, and not be disrupted.

3- Avoidance of invalidation of Salat by the passage of a female, dog or donkey. This is due to the hadeeth of Abu Dharr, who said: “The Messenger of Allah ﷺ said, ‘When any of you is praying and there is in front of him something like the end of a saddle, it will serve as a partition (sutrah) for him, but if there is nothing like the end of a saddle in front of him, then (the passing of) a donkey, woman or black dog (in front of him) would invalidate his prayer.’ I (one of the narrators) said, ‘O Abu Dharr, why a black dog [and not a red or yellow dog]?’ He replied: ‘O son of my brother, I asked the Messenger of Allah ﷺ the same as you asked me, and he ﷺ said: ‘The black dog is Satan.” [ Source: Muslim.]

Some of the rules concerning the sutrah

1- The use of a partition is for both the imam and someone who is praying alone. As for those who are praying behind an Imam, the Imam’s partition is (enough as) their partition.

This is as reported on the authority of Ibn Abbas , who said: “ I arrived at Minna when I was nearing puberty, while I was riding a female donkey. The Messenger of Allah ﷺ was leading the people in prayer. I passed in front of some of the rows (of those who were praying), then I climbed off (my donkey) and sent the donkey to graze. Thereafter, I joined one row and no one objected to my deed.” [ Agreed upon.] 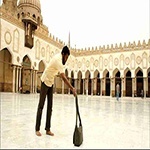 2-It is not allowed to pass in front of a person praying, as that is considered one of the grievous sins. The Prophet ﷺ said; “If one passing in front of the one who is praying knows the extent of his sin, he would have chosen to wait for forty than to pass in front of him.” Abun-Nasr said: “I don’t know if he said forty days, months or years.” [ Agreed upon.]

(Passing before him is sinful) except if the passing is behind his partition, or far away from his place of prostration if he (the person who is praying) did not place a partition. 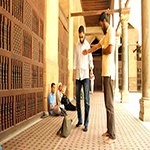 3- It is compulsory for the person praying to prevent anyone who wants to pass before him. It has been reported on the authority of Abu Sa’eed Al-Khudriy, who said that he heard the Messenger of Allah saying: “When anyone prays towards something that serves as a partition between him and people and someone intends to pass in front of him, let him prevent him, but if he refuses, let him fight him for such a person is a devil.” [ Agreed upon.]

4- Some scholars exempt the Holy Mosque (the Ka’abah). They opine that people can walk in front of any person praying there for the general principle of eliminating any discomfort or hardship. This is because prevention of passing in front of the one who prays in the Holy Mosque causes general discomfort and inconvenience.

5- Partitioning during Salat can be done by praying towards a wall, a pillar among the pillars of the mosque, a cabinet or by erecting something like a stick, for example

Invalidation of Salah by the passage of a woman

The Hadeeth (the passage of a donkey, woman and black dog) mentioned above does not liken women to a donkey or a black dog. Mentioning the three (i.e. women, donkey and black dog) in the same context does not imply that they invalidate Salat for the same reason. This, therefore, means that it is not pertinent to adduce the same reason for which a black dog invalidates Salat for the vitiation caused by women or a donkey.

Based on the above, though a black dog is implied to be a devil, this does not insinuate that both women and donkeys are devils, as there may be different reasons that they cause invalidation of Salat, even though they are mentioned in the same context. In fact, mentioning the reason behind a black dog invalidating Salat, but not the others, in the text points to the fact that it is different from the others and does not resemble them.

However it is possible to deduce that the reason for the invalidation caused by women is hinged on the fact that their movement before the one who prays- i.e. close to him- could raise his attention and could prevent him from concentrating on his Salat. That is why women generally attract the attention of men rather than when other men pass by. For this- and Allah knows best- women are considered, in Shari’ah, as invalidators of Salah. This also serves to maintain humility in Salat.

Download : The Sutrah (partition in front of one who is praying) - Salat - Book Illustrated Islamic Law for Acts of Worship

The Sutrah (partition in front of one who is praying)
Salat