Zakat in the context of the Shari’ah means:

A fixed amount of capital to be paid at a specified period to certain groups of people.

The Status of Zakah in Al-Islam

Zakat is an obligatory act of worship and is also the third pillar of Islam. Allah Almighty said: “And perform As-Salat, and give Zakah” (An- Nur: 56).

The Prophet ﷺ said: “Islam is built on five pillars: bearing witness that there is no deity worthy of worship except Allah and that Muhammad is His servant and Messenger, performing as-Salat (the five daily prayers), paying Zakah, going on Hajj (making pilgrimage), and Saum (fasting in the month of Ramadhan).” [ Agreed upon]

The Ruling about the Person who Withholds Zakah(zakat rules)

1- A person withholding Zakat through denial

Anybody who denies the obligation of Zakah has disbelieved in the totality of Islam according to the consensus of the Ummah, if he has been informed about its obligation: this is because he/she has belied Allah and His Messenger.

2- A person withholding Zakat through stinginess

Who withholds his Zakat due to stinginess, but not due to a denial of its obligation, Zakat should be taken from him by force, and he is not considered as having become an unbeliever, although he has committed one of the great sins and a tremendous (very grave) act. This is in accordance with the Prophet’s statement ﷺ concerning the person withholding Zakah: “Every owner of either gold or silver who does not pay his due will be called to account on the Day of Ressurection and plates of fire will be prepared for him. These plates are then heated over the raging flames of Hell Fire (Jahannam)...., whenever they become cold, the process is repeated all over again. This happens on a day that measures fifty thousand (50,000) years, until all the servants have been judged. Afterward, he will be shown his fate – either Heaven or Hell.” [ Source: Muslim]

Furthermore while still alive, if one refuses point blank to pay Zakah, he has to be fought until he succumbs to the order of Allah Almighty and pays Zakah. Allah Almighty says: “However if they repent and perform as-Salat and give Zakah, then leave their way free. Verily, Allah is Oft-Forgiving, Most Merciful.” (At-Taubah: 5)

The Prophet ﷺ said: “ I have been ordered to wage war against men until they bear witness that there is no deity worthy of worship except Allah and that Muhammad is the Messenger of Allah, and observe as-Salat, and pay Zakah; when they have done these, then their blood and property are safe from me (i.e. not to be touched), except if the right of Islam is at stake, and their judgment lies only with Allah.” [ Agreed Upon]

Abu Bakr  indeed waged war against those who withheld Zakah, saying: “By Allah, I would definitely fight against him who makes a difference between prayer and Zakat, for it is the obligation upon the rich; and by Allah, if they were to withhold a camel-cord which they used to pay (as Zakah) to the Messenger of Allah ﷺ, I will fight them for withholding it.” [ Source: Muslim]

The Wisdom behind the Ordainment of Zakah

1- To cleanse the souls and purify them from stinginess, sins and misdeeds. Allah Almighty says: “Take Sadaqah (charity) from their wealth in order to purify them …….. and Allah is All-Hearer, All-Knower.” (At-Taubah: 103)

2- To cleanse, multiply and bless their property. The Prophet ﷺ said: “Sadaqah does not decrease any property.” [ Source: Muslim]

3- To test one’s obedience to the commands of Allah and to give priority to loving Allah first, over and above the love he has for his property.

4- To support the poor and fulfill the needs of the destitute. This builds love and ensures the highest degree of solidarity among individuals in the Islamic society.

5- To become aquainted with giving and spending in the cause of Allah (Almighty).

1- It is a means of attaining Allah’s Mercy. Allah Almighty says: “…and My Mercy embraces all things. That (mercy) I shall ordain for those who are the pious, and give Zakah; and those who believe in Our Signs.” (Al-A’raf: 156)

2- It is a condition that entitles those who pay Zakah victory. Allah Almighty says: “…Verily, Allah will help those who help His cause. (They) enjoin Iqamat-as-Salat, pay the Zakah…” (Al-Hajj: 40, 41)

3- It is a means for the expiation of sins. The Prophet ﷺ said, “Sadaqah extinguishes misdeeds as water extinguishes fire.” [ Source: At-Tirmidhi]

Properties on which Zakah is Obligatory 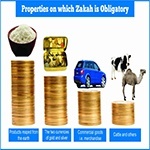 Zakah is not accepted from a disbeliever (non-muslim), because indeed Allah, the Most High, rejects the deeds of the disbelievers.

It is compulsory on all free men. However, it is not required of a slave, since he does not own property; as both he and the property he has ultimately belongs to his master.

3- Possession of the Nisab

It is a certain amount of property or wealth which a person must posses before Zakah becomes obligatory on him.

Conditions the Nisab must satisfy

1- The Nisab is required to be more than what is necessary for the basic needs of man e.g. feeding, clothing, shelter etc. This is because Zakat has been ordained as a support for the poor. It is therefore important that the payer of Zakat is not in need himself.

2- The Nisab must completely belong to a particular individual. Zakah is not paid from money or property that does not belong to a specific person. For example, money that was contributed towards building a mosque, an endowment set aside for the well-being of a community, or properties in the treasuries of welfare or philantropic organizations.

This is the lapse of twelve complete lunar months while the Nisab is in the possession of its owner. This is a special condition when the following are being considered: the two currencies, merchandise and cattle. As for plantations, fruits, minerals and treasures, the lapse of a year is not a pre-requisite.

Download : Rules of zakat in Islam and its conditions - Zakah - Book Illustrated Islamic Law for Acts of Worship


Tags: zakat in islam how to calculate zakat

Rules of zakat in Islam and its conditions
Zakah