Definition: It is owed money to be paid by a debtor.

For example; if an individual possesses $10 000 and he is in debt up to the tune of $10 000, Zakah is not mandatory on him. This is because the debt overshadows the Nisab. This is also the case if he owes $9 950. In this case he does not pay Zakah because the amount he owes has reduced his property so that it is short of the Nisab. However if he is in debt for $4 000, he is required to deduct this amount from his money, then $6 000, on which his Zakah is compulsory, will be the remainder. 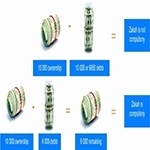 This is only the case if the debtor did not use the debt for trade, such as if he buys a house that he will pay off in installments over a few years, or use the debt to purchase machines worth millions to start a huge project. As a trader might decide to expand his work and thus he buys a new production line for a few millions, which he adds to the one he already has. Do these investment debts lead to dropping Zakah from the assets as well?

To say that it does drop the Zakah would mean that there would be a loss of large sums of money from Zakah due to the poor, and may end in the opinion that many of the contemporary traders are not subject to paying Zakah. The Second Symposium on Contemporary Zakah Issues held in Kuwait in Thul Qi’da 1409 Hijra – June 1989 Gregorian concluded that:

First: All debts that finance commercial work are deducted from assets upon which Zakah is compulsory if the debtor does not have fixed assets that are more than his basic needs.

Third: For deferred housing loans which are usually paid in long-term installments, a debtor pays Zakah on the money that remains from what he has after deducting the annual installment required of him, if the rest makes a Nisab or more.

1- If he foresees an impossibility of the redemption of the loan, for instance as a result of the debtor being bankrupt or denying the debt, then the creditor (payer of Zakah) is not liable to pay Zakah every year on this amount. What he does is pay Zakah for one year, once he recovers the loan.

2- If he does not foresee any impossibility of its redemption, for instance if the debtor does not procrastinate or show any signs of postponement regarding the payment of the loan as he intends to pay it, then the creditor (payer of Zakah) is liable to pay Zakah on it every year. This is because it is considered as if the money is in his custody.

This is a certificate obligating its issuer to pay its bearer a specified amount, when due, in addition to an agreed upon interest payable in accordance with the face value of the bond.

This is clear usury and it is forbidden; because it is indeed the accruement of interest from loans. Bonds are generally forbidden, because it is a loan with a specified interest, and anybody dealing in bonds should turn in repentance to Allah, the Most High.

Ruling Concerning the Zakah on Bonds and its Measure

Bonds are deferred debts due to their bearer from the authority that has issued them, consequently Zakah on bonds is judged in the same manner as the ruling on Zakah on debts. Zakah becomes mandatory on it when it attains the Nisab on its own, or when other things owned by the payer e.g. currencies or commercial commodities, are added to it and a full year lapses on it. In such a case a quarter of one-tenth is paid . When the bond is not yielding except till after some period, Zakah is not waived but it is paid whenever the bond is due, paying the arrears of all the past years.

Definition: This is an amount of money that a worker is entitled to collect from his employer at the end of his service, according to the dictates of the laws and regulations, and when the stipulated conditions are met.

This is an amount of money that the government or organizations pay to employees or workers who are covered by laws of social insurance, when he or she does not fulfil the desired conditions to be entitled to a pension.

This is an amount of money that an employee or a worker is entitled to, on a monthly basis, from the government or an organization after completion of service, according to the application of the laws and regulations, and when stipulated conditions are met.

Zakah is not obligatory on these dues while the employee or worker is still in service, because there is no complete ownership that warrants the obligation of Zakah. As he can neither spend from it nor exercise any of the ownership rights on it during his service years.

It was stated in the first Zakah conference that any benefit money is subject to Zakah and should be added to the money the payer of Zakah has when considering the Nisab and Hawl (lapse of one lunar year).[ Qada’ya Fiqhiyyah Mu’asirah [Contemporary Matters of Islamic Jurisprudence] by Dr. Salaah As-Saawii, page 58.]

All that is intended for rent and is not intended for trade in itself, such as real estate, cars, and production plants and the like

Scholars agreed that no Zakah is due on the actual assets, but its yield is subject to Zakah. Yet it is added to the money the owner has and to trade goods to calculate the Nisab and Hawl.

A quarter of a tenth should be paid as Zakah for the total amount, as is the case for Zakah of currencies. [Qada’ya Fiqhiyyah Mu’asirah [Contemporary Matters of Islamic Jurisprudence] by Dr. Salaah As-Saawii, page 58.]

Definiton: It is money paid in advanced by a leaseholder to the landlord (to ensure the rented object is returned in a good condition).

Zakah is not mandatory on the leaseholder, because it (the money in question) is not in his possession and there is no full claim of ownership, which is a condition for the obligation of Zakah.[ Qada’ya Fiqhiyyah Mu’asirah [Contemporary Matters of Islamic Jurisprudence] by Dr. Salaah As-Saawii, page 60.]

This is an authority belonging to an individual over an abstract entity, whether this is an intellectual product e.g. an author’s right on published works of science and arts, a patent granted for works of industrial invention, or benefit from trade adverts that a trader uses to attract clients, such as trade names and trademarks.

Intangible assets, as it is now known, have a monetary value that is recognised by Shari’ah. Thus, spending from it is permissible according to the guidelines of the Shari’ah. Furthemore, it is safeguarded and it is not permissible to transgress against it.

However, Zakah is not mandatory on the copyright or patent, when considered on its own, because it does not fulfil the conditions of Zakah; but when it yields returns, these are treated as money he owns and benefits from.[ Qada’ya Fiqhiyyah Mu’asirah [Contemporary Matters of Islamic Jurisprudence] by Dr. Salaah As-Saawii, page 60.]

Zakat on Wages, Salaries and Profits from Freelance Work

Remuneration that a worker receives as payment in compensation for his work.

Zakah is not paid for these moneys when taking possession of them. Rather they are added to his other moneys that are subject to Zakah and then Zakah is given out for all the moneys when the Hawl has passed, beginning ffrom when the Nisab was completed. Whatever benefit he receives from this money during the Hawl, Zakah will be paid for that too at the end of the Hawl, even though the Hawl is not complete for each and every part of these moneys, so long as a Hawl has passed over the ownership of the money as a whole for the one who pays Zakah. The value that should be paid is a quarter of a tenth, 2.5%.

It encompasses all that Islamic Law makes forbidden to possess or make use of, whether that wealth was forbidden for being harmful or evil, such as dead meat (dead animals which were not slaughtered according to requirements of Islamic Law) and wine, or is forbidden for an external reason, such as being earned in a defective method, like being taken from its owner without his permission, by force for instance, or taken from him in a manner not approved by Islamic Law – even if it is with his consent- such as through usury and bribery.

Wealth which is forbidden in itself, such as alcohol and pork, is not subject to Zakah, because it is not considered wealth that has any value in Islam. Such wealth must be disposed of in the manner prescribed by Islamic Law for that wealth.

- Concerning wealth which is forbidden for an external reason, which is earned through a defective method, it is not obligatory for the rightful owner to pay Zakah for it due to the absence of the full ownership condition which is needed to make the wealth subject to obligatory Zakah. If, however, it returns to its rightful owner, he must pay Zakah for one year, even if years have passed, according to the chosen opinion.

- The holder of the forbidden wealth is still considered as possessing it if he does not return it to its rightful owner and he has to pay the Zakah due on it, but the sin for taking it remains for what wealth remains with him, and him paying Zakah on the wealth would be considered as part of the religious obligations due on the money/property.

The money he paid out will not be considered as Zakah which he would be rewarded for, nor will this discharge him of the sin of taking it unless he returns all the wealth to its rightful owner, if he knows him,[ Qadhaaya Fiqhiyyah Mu’asirah pg 61 and ff.]

Instructions (How to disburse of ill-gotten wealth)

1- The possessor of ill-gotten wealth, due to the method he gained it, is not the owner, no matter how long he possessed such wealth. Moreover it is compulsory for him to return it to its rightful owner or (the owner’s) inheritor - if he knows him. If finding the legitimate owner proves unsuccessful, it is compulsory for him to spend it in charity to be free of it - with the intention of the charity being on behalf of the owner.

2- If one takes money as payment for work which is prohibited, he has to spend it in any charitable way but he must never return it to whomever he took it from, for that may involve helping another to commit a sin, and also so that the employer does not gather money that would allow him to employ someone to do a job which is prohibited.

3- Ill-gotten wealth is not to be refunded to the person it was taken from, if the person is adamant and bent on continuing in the prohibited dealings that led to the wealth being haram in the first place, e.g. benefits accruing from usury. This wealth should be spent on charity as well.