The Names of Madinah

Allah The Most High said: “They (hypocrites) say: ‘When we return to Madinah, the honourable will surely expel therefrom therefrom the meaner’” (Al-Munaafiquun: 8).

On the authority of Jabir bin Samurah  who said: I heard the Messenger of Allah ﷺ saying: “Indeed, Allah the Most High named Madinah Taabah.” [ Source: Muslim.]

On the authority of Zayd bin Thabit from the Prophet ﷺ: “Indeed it is taybah; it removes sins as fire removes the dirt from silver.” [ Agreed upon.]

1- On the authority of Sa’ d bin Abi Waqqas t who said that the Messenger of Allah ﷺ said, “Madinah is better for them if they knew; nobody leaves preferring another place to it except that Allah replaces him with someone better than him. And nobody perseveres with its hard times[ Al-La’waa: Hardship and constraints] and difficulties except that I shall be for him on the day of Resurrection an intercessor or a witness.” [ Source: Muslim.]

2- On the authority of Abu Hurayrah t: Indeed the Prophet ﷺ said: “I have been ordered to go to a village[ Ordered to go to a village: to migrate to it, stay and live therein.] that eats up other villages[ Eats up villages: Its people are conquerors of other places and it will be the centre of the troops of Islam.], which people call Yathrib[ People call it Yathrib: It was called Yathrib by its people during the Jahiliyah period, but it is more suitable to call it Al–Madinah.] and it is Madinah; it expels bad men[ It expels people: i.e. it removes the evil ones among them.] as bellows[ Bellows: that which the blacksmiths blow their fire with.] remove dirt from iron[ Iron dirt: Its dirt and other impurities.].” [ Agreed upon.]

The Special Qualities of Madinah

1- It is a sacred precinct and a safe haven between ‘Ayr and Thawr–two mountains–so the trees therein are not to be cut and the game are not to be hunted.

The Messenger of Allah ﷺ said: “Madinah is a sacred precinct–that which is between ‘Ayr and Thawr–whosoever does evil therein, or shelters an evil doer, then upon him is the curse of Allah, the angels and mankind altogether.” [ Agreed upon.]

The Messenger of Allah ﷺ made it sacred just as Ibrahim made Makkah sacred. 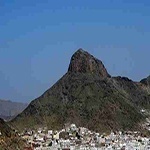 2- The reward of Salat therein is manifold.

The Prophet ﷺ said: “Salat in this Mosque of mine is better than a thousand Salat in any other place, apart from the Haram Mosque.” [ Source: Bukhari.] 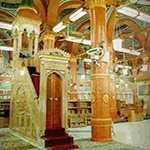 3- In it is a meadow from the meadows of heaven, wherein it is Sunnah to observe Salat.

4- The false Messiah (al-Masih al-Dajjal), who will appear towards the end of time, will not be able to enter the city, nor will plague.[ Plague: a malignant disease.]

On the authority of Anas ibn Maalik t who said that the Messenger of Allah ﷺ said: “The Dajjal will come to Madinah and will find angels guarding it, no plague shall enter it nor will the Dajjal, insha-Allah.” [ source : At-Tirmidhi.]

5- The Messenger of Allah ﷺ sought blessings for it.

On the authority of Anas t: The Prophet ﷺ said: “O Allah, put in Madinah double of what you have put in Makkah in terms of blessings.” [ Agreed upon.]

Ruling on Visiting the Mosque of the Prophetﷺ

Visiting the Mosque of the Prophet ﷺ is not part of the conditions of Hajj, and neither is it one of its pillars or obligations; rather it is a recommended act (Sunnah) and can be performed at any time.

Furthermore, it is compulsory that the intention for the visit should be to pray in the Mosque, and not to visit the grave. On the authority of Abu Hurairah t, who said that the Prophet ﷺsaid: “No one should journey to any Mosque except for three Mosques: the Haram Mosque, the Prophet’s Mosque and al-Aqsaa Mosque.” [ Source: Muslim.]

Shayk al-Islam Ibn Taymiyyah said: “If the intention of traveling is to visit the grave of the Prophet ﷺ , but not to pray therein, then the view of the Imams and majority of scholars is that it is neither a legislated nor a commanded act. The ahadeeth about visiting the grave of the Prophet ﷺ are all weak, according to the consensus of the scholars of ahadeeth, rather they are all fabricated and none of the reliable narrators of the Sunan related any of them, nor have any of the imams used any of them as evidence.” [ Majmoo’ al- Fatawa vol.27, pg 26.]

Rulings Regarding the Visit and its Etiquettes

1- When the visitor to the Mosque arrives there, it is Sunnah for him to enter with his right foot saying: “Allahummaftah lee abwaaba rahmatika.” [ Source: Muslim.] Meaning: Oh Allah, open the doors of Your mercy for me.

2- He observes two raka-at to greet the Mosque. It is better to observe the two raka-at in the area of the Noble Meadow.

3- It is Sunnah to visit the grave of the Prophet ﷺ and those of his two companions, Abu Bakr and Umar. He (the pilgrim) stands politely and reverently facing the grave of the Prophet ﷺ, and in a low voice says: “As-salamu ‘alaika aiyuhal nabeyu warahmatullahi wabarakatuh, Salallahu ‘alaika, wa jazaka ‘an omatika Khayran.” Meaning: may the peace, mercy and blessings of Allah be upon you, O Prophet. May Allah bless you, and reward you on behalf of your nation.

After uttering the above, it is recommended to take a step or two to the right to reach the grave of Abu Bakr t and greet him, saying: “As-salamu ‘alaika ya Aba Bakr khalifata rasoullulahi, salallahu ‘alaiyhee wa salama, wa rahmatullahi wa barakatuh, radyallahu ‘anka wa jazaka ‘an omati mohammadin, salallahu ‘alayhee wa salam, khairan.” Meaning: may Allah’s peace, mercy and blessings be upon you, O Abu Bakr, Caliph of the Messenger of Allah ﷺ. May Allah bless you and reward you on behalf of the nation of Muhammad ﷺ

Following that, it is recommended to take a step or two to the right once more to reach the grave of Omar t and greet him, saying: “As-salamu ‘alaika ya Omar, Ameeral Mo’mineen, wa rahmatullahi wa barakatuh, radyallahu ‘anka wa jazaka ‘an omati mohammadin, salallahu ‘alayhee wa salam, khairan.” Meaning: may Allah’s peace, mercy and blessings be upon you, O Omar, Ameer of the believers. May Allah bless you and reward you on behalf of the nation of Muhammad ﷺ.

4- It is Sunnah for someone visiting the Prophet’s Mosque to pray the five daily prayers therein and engage in much remembrance of Allah and supplication to Him there, and also perform many supererogatory prayers, especially in the Noble Meadow.

6- It is Sunnah to visit the cemetery of Baqee’[ Al-Baqee’: The place where a large number of the companions were buried.] and the graves of Hamzah and other martyrs, because the Prophet ﷺ used to visit them to pray for them. He would say: “As-salam alaykum ahlad diyaar minal mu’mineen wal muslimeen wa innaa insha Allah bikum lalaa’ikoon, as’alu llaha lana walakumul ‘aafiyah.” Meaning: “Peace be upon you, O people of the graves from among the believers and Muslims. Indeed we shall join you if Allah wills. I ask Allah to grant us and you safety.” [ Source: Muslim.]

Mistakes and Warnings Regarding the Visit

1- Traveling and carrying luggage with the intention of visiting the Prophet’s grave and other archaeological (historic) sites in Madinah. What is authorized is traveling to visit the Prophet’s Mosque to pray in it, while visiting the grave is included in the visit to the mosque.

2- Facing the grave when supplicating.

3- Supplicating to the Prophet and seeking one’s needs from him instead of Allah, the Most High, which is a kind of major shirk.

4- Rubbing the walls of the grave chamber in order to seek blessings; this is one of the forbidden innovations and is a means that leads to committing major shirk.

5- Raising one’s voice while at the grave of the Prophet ﷺ, staying there for a long time, repeating the Tasleem from afar every time one enters (the Mosque), and placing the right hand over the left on the chest, as done in salat, while saying the Salaam greeting.

Rites of Hajj and Talbiyah
Hajj